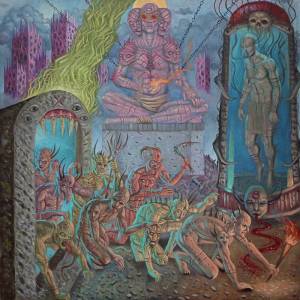 This is the second album from UK/Austrian death metal band Cognizance.

Despite enjoying Cognizance’s early work, (such as Inquisition), I somehow managed to miss out on the band’s debut album Malignant Dominion. As such, when Upheaval appeared, lest I miss out again, I greedily took it to one side and hungrily devoured it.

Across 33 minutes Upheaval batters and bruises us with their take on modern death metal. These songs combine a technical approach with blistering speed and crushing groove. They’re structured so that neither the technicality nor the brutality rules too much, as the emphasis here is very much on the songs themselves; Cognizance craft brief flurries of aggression that stick with you more than you might expect. This album is certainly not without hooks.

The tracks are short and to the point, piling on the riffs and melodic bite. Every song is home to a selection of crunchy riffs that sound just right, and the band know how to string these together to flow well into songs that hit the spot. The melodies on the album seem to flow freely like something superheated; this is especially true of the many solos that pepper the album like bright slices of colour. I really like the fact that Cognizance pack so much meaty destruction into such tight, focused tracks. Almost every song barely breaches three minutes, and the time is well-spent due to good songwriting and editing. This is an album utterly without filler.

I’ve commented in the past on the singer’s vocals, and he still sounds great on Upheaval. His growls are clipped and nasty, and he does a great job of providing a brutal focal point to the music’s precise carnage.

I haven’t been disappointed with Upheaval, and Cognizance have delivered a really strong album. Packed with catchy technicality, barbed vocal hooks, and brutal songsmarts, Upheaval is death metal done right.

One thought on “Cognizance – Upheaval (Review)”