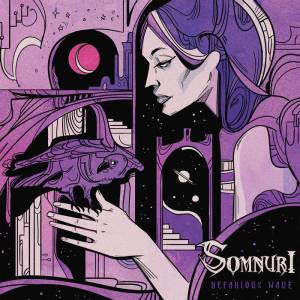 Somnuri are a sludge metal band from the US. and this is their second album.

Featuring an ex-member of Cleanteeth, Somnuri’s sound can best be described as something like progressive sludge metal. The promo blurb mentions bands such as High on Fire, Mastodon, Converge, Torche, and Baroness, and this sets the scene nicely. However, while all of the above is undoubtedly fitting, I don’t feel it really covers what the band have skilfully created here; hardcore, doom, and grunge all have their place in Somnuri’s sound too, for example.

Nefarious Wave contains 37 minutes of heavy music. It spans the fast and aggressive to the slower and emotive, with much ground covered in between. Some songs, (or parts of songs), focus on blistering speed and crushing brutality, while others are more groove-oriented and demonstrate a keen melodic edge. At other times the band enter more delicate waters, portraying sensitive emotion with deft skill. In other moments the band unleash a set of killer riffs and just rock out for all it’s worth.

These songs cater for people that are into abrasive punk-tinged sludge metal with screaming roars and bludgeoning guitars, yet still want to be able to enjoy strong melodies, catchy rhythms, and emotive singing. Somnuri effectively marry the underground heaviness of the style with the more accessible side; never compromising on either, this album is an exemplary showcase of how to effectively combine both extremes of the sludge metal spectrum.

This is a well-written collection of tracks, and the album is a satisfying listen. It really scratches that itch for the times when you want something that can flatten you with ferocious heaviness, yet also uplift with potent harmonies and a rich emotive presence. In this way Nefarious Wave brings to mind bands like Vokonis, Dvne, and Sorxe; Somnuri’s music is related to that of groups like these, yet also quite distinct from them. Somnuri have much more of a hardcore bite, for example.

I really like Nefarious Wave. It’s not often that a release like this comes along, so when it does, you just have to play it at full volume and hold on for dear life, as it’s a wild ride you’re about to go on.