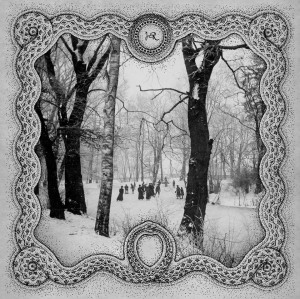 This is the second album from Orm, a Danish black metal act.

Containing just two songs, yet lasting 47 minutes in total, Ir is a bold statement of both ambition and competence from Orm.

The music is raw and atmospheric, delivering emotive songs that mix harsh aggression with enticing splendour. These two long songs each take the listener on a journey into Orm’s world, one that’s filled with loss and an exploration of that loss. The end result is an affecting and compelling work.

Epic and filled with grandeur, while also being direct and forthright when needed, Orm display a range of abilities, moods, and stylistic choices across these lengthy tracks. The band have a melodic heart, and these melodies are mixed with a gritty realisation of black metal and what it’s capable of. Acoustic breaks, unexpected instruments, and other enhancing accoutrements add further depth and texture to the album. Orm also have a strong understanding of dynamics and structuring, allowing the songs freedom to roam where they will, while also keeping an iron grip on their overall direction and focus.

The vocals are distinctive and characterful, giving voice to the band’s collective emotional expression where the music alone is not enough to do so. At other times, they are left silent, allowing the power and grace of the music itself to do the talking.

Finely crafted, these songs have plenty of hair-raising moments, where a particular section, riff, or melody, (for example), causes you to sit up and take notice. In contrast to this, sometimes you’re so drawn into the music, so immersed in its story, that you barely notice anything, so absorbed in its worldbuilding that you simply have to soak up the entire experience.

Steeped in atmosphere and emotive depth, these songs channel darkness and grief into a compelling album of blackened art.