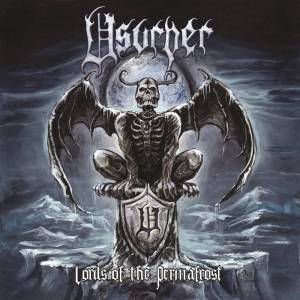 This is the sixth album from Usurper, a death/thrash/black metal band from the US.

This legendary band’s long-awaited new album, (a mere 14 years since the last), finds Usurper in fine form. The band have an old-school death metal base, onto which they build an imposing and terrifying edifice built with chunks of black, thrash, and traditional heavy metal. The end result is a structure that has soundly stood the test of time, and has been only strengthened with this latest addition.

There’s absolutely no messing around here. The band get down to business with the right, confident attitude, and resolutely demonstrate why they have been such a sorely missed presence from the metal scene. Across eight thundering, storming tracks, Lords of the Permafrost puts Usurper right back on the metal map, as rulers of everything they survey. Which is only as it should be.

Usurper deal in quality, well-written songs first and foremost, and this album is full of them. With high-energy thrash mayhem and belligerent heavy metal songwriting skill, all wrapped up in death metal muscle and black metal atmosphere, I’ve missed Usurper more than I realised.

These violent metal anthems have been waiting for probably far too many years to be unleashed, and now that they have, the world is not safe from their infectious aggression and attitude. Lords of the Permafrost is the kind of return most bands who have been away from the scene for so long could only dream of.

2 thoughts on “Usurper – Lords of the Permafrost (Review)”