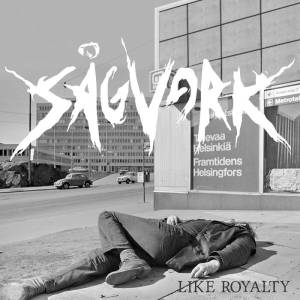 Sågverk are a Finnish blackened crust band and this is their second album.

This is the follow up to the belligerent Sahataan ne Kaikki from 2015. Like Royalty finds Sågverk in fine form. They have managed to take what made their debut album so enjoyable and refine and develop it further into the very satisfying 38 minutes of music that they have given us here.

Mixing together crust, punk, hardcore, and a pinch of foul black metal, this is groove-oriented black ‘n’ roll. Even the blast beat sections have a sense of rhythm as they pound you into oblivion. The focus is very much on songs, and these are written and delivered well across the album’s playing time.

The guitars sound like chainsaws and the band have a good ear for a good riff. There’s a Swedish influence that can be heard on the songs, both from death metal and hardcore/crust, and the band do a very pleasing job of incorporating this into their energetic assault. The music has more of a hardcore feel overall, and although there’s still a definite black metal presence, Like Royalty ramps up the crust and punk more than the debut album did.

The progression from Sågverk’s first album is huge. As good as that first release was, Like Royalty ups the ante in every department.

Blackened crust like this is in short supply. Yes, there may be many bands ostensibly playing this style, but Sågverk have got something quite special going on here. Hopefully Like Royalty will raise the profile of this hugely enjoyable band and will get them noticed in front of a wider audience. They certainly deserve it.