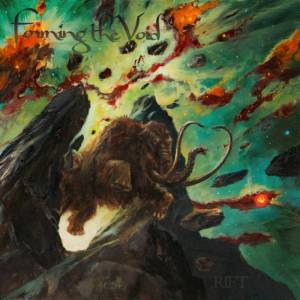 Forming the Void are a progressive stoner/sludge doom band from the US. This is their fourth album.

After enjoying Forming the Void’s split with Pyreship, I was eager to hear more from the band. Thankfully, that desire has been catered to in the form of Rift; 46 minutes of new material for me to wrap my ears around.

The band mix together a highly engaging blend of stoner, sludge, progressive, doom, and psychedelic rock/metal. It’s all added to by a hard rock sensibility that ensures the importance of catchy songcraft remains first and foremost in the band’s minds at all times. There’s a definite mix of old and new in Forming the Void’s sound, with everything from 70s classic rock, to 90s grunge, to modern progressive metal and rolling stoner groove getting a look in. Although Mastodon are an obvious reference point for Forming the Void, you can also hear other elements in their sound, such as Yob and Baroness, as well as the aforementioned older influences from decades past.

The band know how to write a good riff, that’s for sure. I also really like how warmly heavy the distorted guitars are. It’s great to hear something as heavy as this is also be so melodic and thoughtful.

The singer has a striking voice that’s imbued with a melodic charm and plenty of presence and character. He acts as a focal point for the band, and his performance can’t be faulted. However, the music is so strong that he’s merely one single component of what makes Rift such an immersive, compelling collection of tracks.

With memorable songwriting and a beefy, heavy production, this is music that’s instantly captivating, yet has sufficient substance to hold attention throughout the playing time.

Very highly recommended. Worship the riffs and get lost in the heavy grooves and intricate nuances of Forming the Void’s new album.