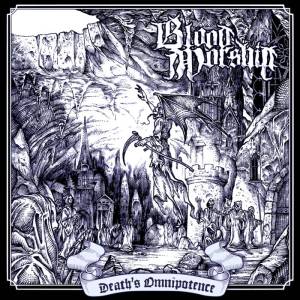 This is the debut EP from Swedish black metal band Blood Worship.

Here we have 21 minutes of cold, venomous black metal. The promo blurb says that it’s for fans of Dissection, Naglfar, Marduk, and Satyricon, and it’s hard to disagree with that assessment. I’d also throw in a bit of A Grand Declaration of War-era Mayhem regarding some of the band’s riffs too, although this is largely a more minor aspect of their sound.

As soon as I press play I find I immediately like the production. The sound is sharp and clear, allowing the band’s mystical melodies to be highlighted, while giving enough well-rounded life to the drums and the serrated vocals. You can also, believe it or not, actually hear the bass guitar’s contribution too, (which reminds me on more than one occasion of Vreid).

Speaking of the vocals, they’re performed in a traditional blackened manner with plenty of acidic charm. Just like the rest of the music the singer’s voice is raw and uncompromising.

The melodic aspect of this EP is probably its strongest asset, although Blood Worship aren’t a fully melodic band. There are plenty of breaks from the bright leads, offering a more blackened and sometimes atypical approach to riffs, (once again, see the Mayhem influence). Although mainly fast-paced, there are plenty of additional ideas strewn around the songs, and the band do vary the pace on occasion, probably most notably in the final, longest song Shadows Etched in Stone.

Death’s Omnipotence is a highly promising start for this new band, and I look forward to whatever they do next. Check it out.