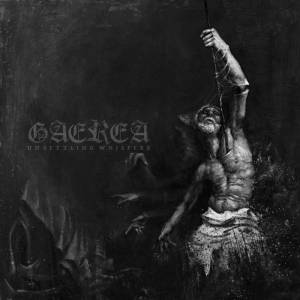 Gaerea are a Portuguese black metal band and this is their debut album.

On Unsettling Whispers Gaerea have crafted 42 minutes of black metal that’s distinctly non-standard and in many ways is quite…unsettling.

Yes, the album is quite aptly named, although most of Gaerea’s music is more like a roar than a whisper. ‘Unsettling Roars’ doesn’t quite have the same ring to it, however, does it?

Anyway, Gaerea’s bleak, dark vision is expressed through cold and nihilistic black metal that mixes many layers of nuanced delivery and textured blackness into its framework. This is music that’s clearly been thought about, and manages to express itself in a way that’s obviously a black metal creation, but one that’s a lot more individually self-styled than that of most similar bands.

The songs are expressive and well-written, taking elements from other extreme metal sub-styles into itself. These are forged anew in the fires of Gaerea’s ambition, to rise again mangled and corrupted into something that the band can work with to realise their foul work. Dissonant, modern, atmospheric, and post-black metal influences can be heard, as well as some aspects of sludge, hardcore, and death metal.

The music is a multifaceted beast, with harsh distortion and nuanced shaded introspection both having a place in the band’s arsenal. Most of the album is sleek, barbed, and menacingly distorted, but in very atypical ways to a lot of black metal.

The album has a really first-rate sound, which the band make the most of throughout the release. Unsettling Whispers is quiet, delicate, and textured in the softer parts, and huge and monolithic in the louder, heavier parts. As you can probably guess, the latter outweigh the former by quite a bit, but the former are still important.

Gaerea have managed to take the inventive, experimental, and forward-thinking spirit that’s hidden at the grim core of black metal and made it their own. Not just that, but they’ve made it sound otherworldly and dangerous too.

Unsettling Whispers is a success. Listen at your peril.