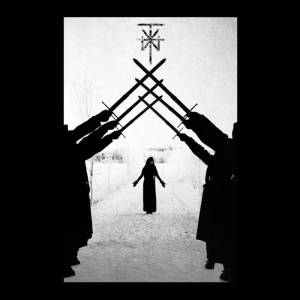 This is the debut EP from Tyhjä, a black metal band from Finland.

Here we have almost 19 minutes of blistering, ugly hate, which manifests itself, (mostly), as second wave black metal played with passion and bile.

The raw aggression of Tyhjä’s music has been enhanced with elements of grind, crust, and hardcore, which has led to the creation of songs that are as nasty and vicious as anything out there.

The band’s frozen assault is full of grim aggression and malignant violence, and the crust/grind influences really are felt in the attitude and bearing of the songs, not to mention the enhanced aggressive qualities that they wear with belligerent pride.

This is not a one-dimensional beast though, and the more direct grind/hardcore influences are only one aspect of Tyhjä’s delivery. The band do have a mildly melodic edge to them here and there, and certainly have their coldly atmospheric moments; second wave black metal is as much of their sound as anything else here, of course. More so, really, as it underpins everything else.

Vocally we get a traditional blackened croak, and the singer performs his role admirably.

This is music with a particular underground style and authenticity, and I like it very much. If Tyhjä can channel what they have crafted here into a full length release of equal, (or greater), quality, then we’ll have something very poisonous, dangerous, and ultimately very compelling on our hands I’m sure.