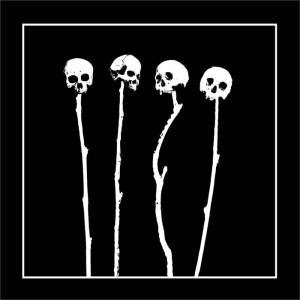 Gnaw Their Tongues is a one man experimental noise/black metal artist from the Netherlands and this is his latest album.

If you haven’t encountered the harrowing works of Gnaw Their Tongues before, then prepare yourself. This is a 36-minute trip into the nightmare visions of a tortured artist channelling what Hell must surely sound like.

Combining noise and punishing electronics into a industrial framework and coating everything with a veneer of blackened hatred, this is music for the hardened connoisseur of ugliness and sonic obsessions. The maniacal howling and screaming of the vocals are your near-constant companion as you are forced, under great duress, to explore this terrifying release.

The music is filthy and grim, covered in disgustingly harsh sounds and apocalyptic heresies. There’s a grim majesty to this fiend’s music, a sort of mechanised darkness that sees the artist delivering his nightmarescapes through bleak atmospheres, infernal rhythms and industrialised beats. The oppressive evil that Genocidal Majesty radiates is both suffocating and compelling, and I can’t help but want to completely absorb and smother myself in the musical outpourings that are on offer here.

I’ve warily navigated through a great deal of material that the artist behind Gnaw Their Tongues has produced over the years, and I have to say that I think Genocidal Majesty is one of his greatest achievements so far. Less overtly blackened than some of his works, but far less noise-oriented than others, this album strikes an almost perfect balance between the two. The result is a collection of foul evil that, it must be said, is simply a deeply enjoyable listen. Assuming, of course, you can stomach this kind of extremity in the first place.