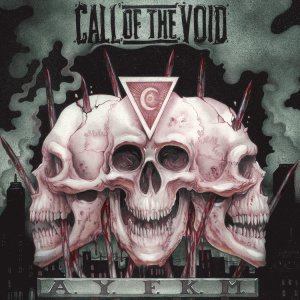 Call of the Void are a US hardcore/grindcore band and this is their latest EP.

Call of the Void operate from a mixture of hardcore, grind and sludge metal influences. This sees them taking all three, rolling them into a dense, dangerous ball and then throwing it as hard as they can at anyone close by.

Yes, 2015’s Ageless was such a strong album that it still remains one of my favourites from that year. Due to this, I was greatly looking forward to hearing this new EP, but there was also some trepidation as they no longer have the same singer that they had on Ageless.

The first track, Get in the Van, starts off slow and heavy, building an apocalyptic feeling before halfway though changing gear and battering you senseless with speed and intensity. The vocals may not be those of the old singer, but any thoughts of this are wiped away in your own blood as clipped, harsh vocals, (shared between guitarist and bassist), beat you around the head until all you can think about is how you’re going to survive the onslaught.

It seems that Call of the Void may have changed lineup and how they operate, but they’re still as brutally enjoyable as ever.

The second track, amusingly titled Are You Fucking Kidding Me?, (AYFKM), grooves and rages for less than two minutes, highlighting the band’s punk influences in the beats and riffs. It’s over before you know it.

Throwing Bullets is tense, muscular hardcore with plenty of aggression and attitude. Like a car crash involving Pig Destroyer and Trap Them, it’s a hefty piece of brutality, make no mistake.

Starting off with an ominous chugging, On and On has a Converge-esque swagger to it that builds with menace across three minutes of heaviness. It’s probably one of the catchiest tracks here, too.

Never Enough is the last song on the EP, all crunchy guitars and belligerent groove.

Call of the Void are just so good at what they do. Somehow they manage to perfectly balance heaviness, brutality, intensity, songs and catchiness into short, angry music. Memorable and full of barbed hooks, AYFKM is a must for anyone into aggressive, heavy music.