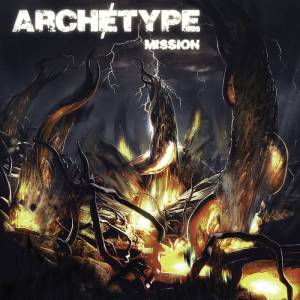 The songs have a decent mixture of aggressive thrash metal, (with a kind of German, Destruction/Kreator feel), and melodic death metal, (Carcass/Arsis), mixed in with more technical and progressive tendencies that see the band producing some quite long tracks here.

The band know how to play, certainly enough to warrant a progressive tag, and the music can sometimes see them wandering all over the place in an angry frenzy. There’s a free-form feeling to some of this, partially because of the vocal style, but partially as a result of the music itself. Despite this, I suspect it’s anything but, with the band in full control of what they are doing.

Speaking of vocals – they’re quite individual, coming across as the demented cousin of the singers of Carcass, Kreator and Sikth. Sometimes it’s like the singer’s on a totally different page to the rest of the band, yet strangely it all fits together and works.

Yes, this is not your typical release. If you’re looking for more of the same tried-and-tested tripe then move along, as Archetype definitely sing to their own hymnbook. Although I like this and can definitely appreciate what they do, it’s certainly something that I have to be in the mood for, as sometimes you just want something a bit more straightforward. Other times though, when you’re in the mood for something a bit unhinged and crazy, Archetype are the perfect listen.

This is one you must check out.