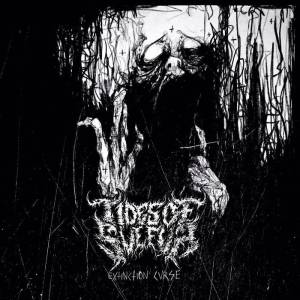 This is the début album from Tides of Sulfur, a death/sludge metal band from the UK.

Like The Dead, Tides of Sulfur combine death and sludge metal together into a hideous, swampy mass. Also like The Dead, it’s hard to know whether to categorise them as death metal or sludge metal. Essentially it doesn’t really matter, I suppose, as the band manage to provide a pretty good synthesis of the two on Extinction Curse.

This is heavy, heavy, heavy. Rhythmic death metal riffs are joined by a ferocious sludge delivery and a decent amount of doom here and there too. The song lengths allow them the time to develop their sludgy assault, and no stone is left unturned in their quest for sonic excess.

Whether it’s sludge riffs with metal solos, or death metal riffs with a sludge swagger, the band easily let the guitars do the talking as I’m once again brought back to the inevitable conclusion; this is heavy, heavy, heavy.

These songs are well-written and have a lot of things to recommend them. There’s a decent variety in the riffs and styles throughout the tracks, and the band clearly know what they want to achieve and how to accomplish it.

The singer screams and growls throughout, always sounding savage and unwholesome no matter the vocal choice.

I love the variety on this release. We get everything from blasting death metal; to slow, cavernous doom; to upbeat Southern styled riffs; to morbid, light mood-building. All of it is wrapped in the band’s grim aesthetic and holistically performed with a focused strength of will.

Think of a band with an upbeat sludge sound like Raging Speedhorn, and add in some death metal that knows how to have both brutal and slower parts, like Incantation or Hooded Menace; this will give you a good idea of where Tides of Sulfur are coming from and why you most definitely should spend the time listening to them.

Heavy, engaging and surprisingly addictive, Tides of Sulfur have impressed with their individual take on sludge and death metal.

Also, did I mention this is heavy?