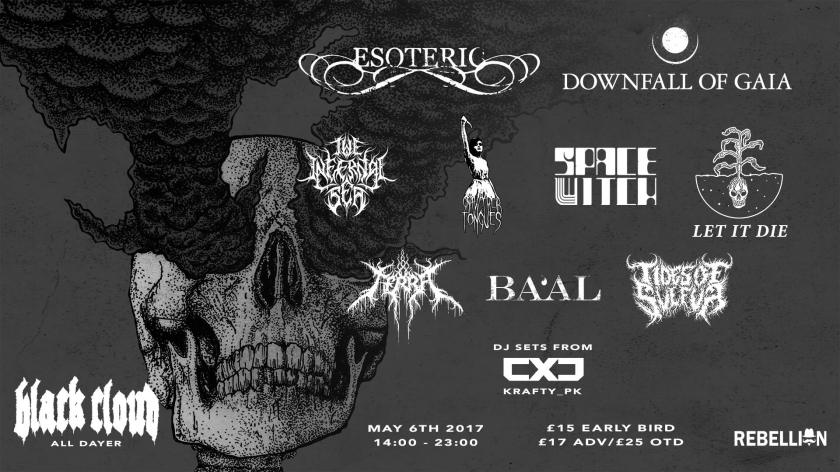 There’s a very special day approaching soon – May 6th 2017. Why is this date so important? Well, if you’re in the UK on that Saturday, it means you can get on down to the Black Cloud All Dayer in Manchester.

Sign up for the Facebook event and get your tickets here – it’s going to be a good one.

The lineup for the day is ridiculously strong. Below we’ll have a look at each of the bands playing in turn. With such a wealth of talent on the bill, it would be foolish to miss this. 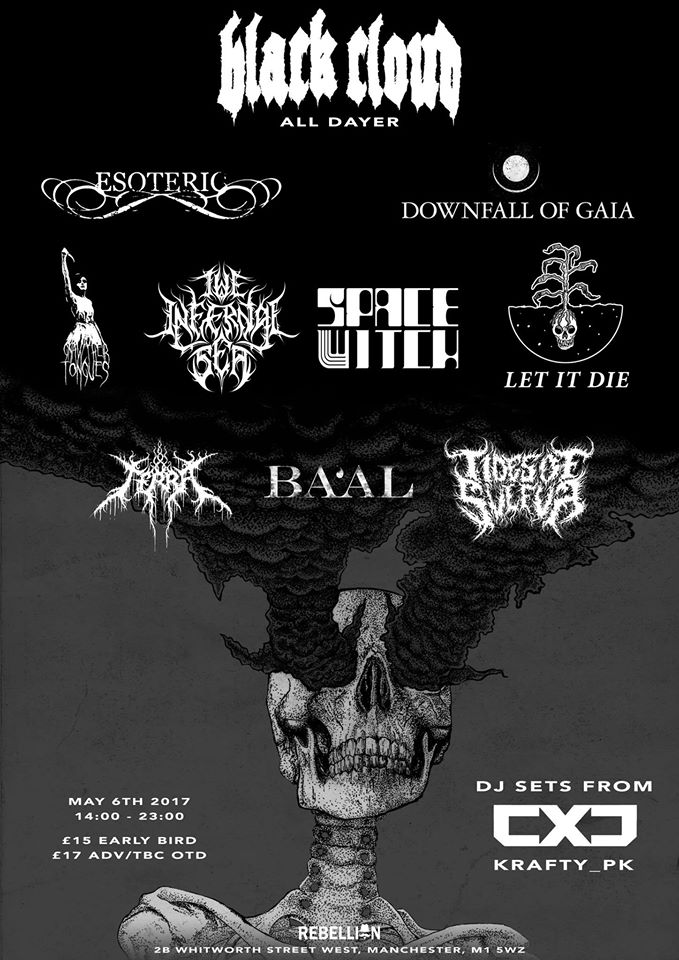 Ba’al are a post-metal band influenced by the likes of Cult of Luna, Isis, and Neurosis. They haven’t been around for that long, but are apparently close to releasing their debut EP. They’re the only band on this lineup that I haven’t heard at all, so I’m looking forward to getting to the venue nice and early to make sure I check them out. I suggest you do too.

If epic-length, vicious, atmospheric black metal is your thing, then look no further than Terra. The band’s sprawling, involving, blackened intensity is sure to go down a storm, expanding to completely fill the venue with their grim, textured assault. I, for one, can’t wait.

At Wonderbox Metal we luuurrvveee Tides of Sulfur. Their debut album Extinction Curse is such a heavy, nasty piece of work that it’s a twisted joy to listen to. It’s also utterly infectious, probably in a bad way, but it’s hard to care when you’re being swamped by such tar-black heaviosity and savage riffs. Tides of Sulfur effortlessly combine death and sludge metal like it’s the most (un)natural thing in the world. The result? One shockingly engaging and addictive slab of brutality.

Arguably the most chaotically brutal band on the bill, Let It Die offer a ferocious grindcore/hardcore mix, with some sludge thrown in for good measure. This is not music for the weak of heart. It’s gritty, nasty, and downright ugly. It’s also very, very good.

Now here’s another band I cannot wait to see live. Their music is such a comprehensive experience of heavy, psychedelic doom metal that I can only imagine them absolutely flattening everything anywhere hear their speakers when they play. Space Witch take the listener on near-incomprehensible cosmic journeys. Enhanced by meaningful electronic effects, this is colossal doom with real substance and weight.

Having unfortunately missed The Infernal Sea at last year’s Damnation Festival, I’m very happy at having the chance to rectify this now. The band’s second album The Great Mortality is a massively strong release that I can’t stop listening to. The album sees The Infernal Sea offering up a blend of sophisticated and aggressive black metal, with a lot of really good ideas and nice touches included in its playing time. This is very definitely a band to not miss out on.

Now here’s a band that I never expected to get to experience in the flesh. Combining harsh black metal with punishing electronics and scathing noise workouts, Gnaw Their Tongues is a one-man wrecking ball of darkness and ugly impulses. This will surely translate into one visceral, apocalyptic performance in the live environment. It’s going to be one Hell of a show.

Judging by the quality of their latest album Atrophy, Downfall of Gaia are surely one of the larger draws at the Black Cloud All Dayer. Playing post-black metal with sludge elements and no lack of aggression, the band’s engaging and emotive assault is one that’s hard to beat. With a compelling mix of atmosphere and fury, make sure you get down to the front early enough to witness the full Downfall of Gaia experience.

Esoteric are legends. Their brand of crushing, suffocating music has lead the way in funeral doom since their first album was released way back in 1994. They are bringing their awe-inspiring monolithic sound to Manchester, and they promise to be every bit as huge live as they are on record. With an enviable selection of colossal songs to choose from, Esoteric are sure to satisfy everyone privileged enough to see them.

So there you have it. Nine stellar reasons to attend the first Black Cloud All Dayer festival in Manchester. I’ll see you down the front.