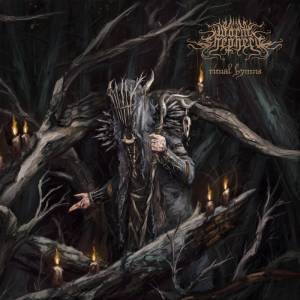 Worm Shepherd are a blackened deathcore band and this is their second album.

It’s been less than a year since 2021’s In the Wake of Sol, but here we are already with another Worm Shepherd album. Not that I’m complaining, as that album was a solid slab of blackened atmosphere and crushing deathcore heaviness.

So, what has Ritual Hymns got to offer? A lot, it turns out.

Worm Shepherd give us 54 minutes of new material on their latest album. It’s one track less and three minutes more than their debut, indicating that the average song length has increased. This extra time has mostly been filled by an increase in technical extremity and an improved focus on sinister blackened atmosphere.

The songs are built atop sturdy deathcore foundations, but have been enhanced with a number of additional influences. Symphonic black metal is the obvious one, but technical death metal and brutal slam elements have also been skilfully incorporated into the music. The end result is a collection of tracks that lean heavily on infernal black metal atmosphere and grandiosity, while not stinting on the brutal heaviness or direct aggression.

The songs hit hard. Whether it’s scathing blackened blast beats, thunderously crushing breakdowns, or menacing atmospheric workouts, Worm Shepherd hit with the force of a maelstrom. Resistance withers in the face of their relentless assault, and all you can do is submit to their malevolent display of power.

The music is well-written and displays a surprising amount of variety for something of this ilk. A good range of paces and dark moods are showcased across the album, and the music flows well from one brutally grim song to the next. I’m impressed by the band’s dedication to extremity; this is not an album for fans of the more commercial side of the style.

Improvements abound on Ritual Hymns. The songwriting is tighter. The dynamics and structuring better. The vocals are more individual and charismatic. The orchestration more deeply embedded. The slam and breakdown sections are well-integrated and devastating. Basically, Worm Shepherd’s second album is better than their first, which in itself was a good record. What will their third be like, I wonder?

Until then, I have to say, Ritual Hymns is pretty impressive stuff. I was a bit apprehensive about a new album so soon, as well as the generally longer songs, but against all expectations the band have triumphed. If you’re a fan of blackened deathcore or blackened death metal, then this is something you should definitely check out.