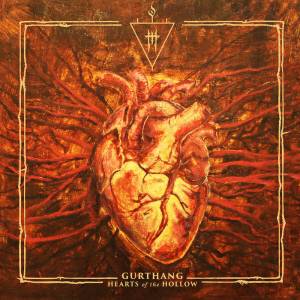 This is the seventh album from Polish black metal act Gurthang.

2019’s Ascension was an album that I enjoyed at the time, but which has only increased in my estimation since. As such, I was eager to hear their latest creation. Hearts of the Hollow spends its 43 minutes subjecting the listener to the band’s malevolent mixture of black and doom metal.

The music essentially continues on from where Ascension left off, although in a more refined way, hence the shorter duration than Ascension‘s 57 minutes. One of the things I liked about Ascension was its ability to produce textured music that combined blackened soundscapes with doom highlights, and Hearts of the Hollow follows this up pretty nicely.

These new songs are rich in feeling and display a depth of atmosphere that’s hard to shake. It’s raw and underground, but in a way that imbues the music with character and an organic vibrancy that’s very moreish. Well-written passages and well-realised ideas are incorporated into a holistic approach, resulting in an album that sounds and feels very complete.

Gurthang do very well to combine raw underground black metal and filthy doom with a mastery of melody, atmosphere, and songwriting that puts many larger acts to shame. Hearts of the Hollow is an enjoyable and rewarding listen, and I strongly suggest you give it some time.