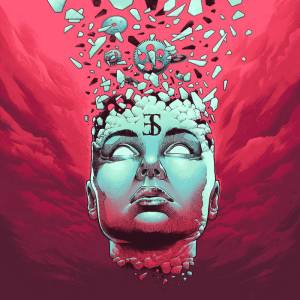 This is the fourth album from UK metallers Employed to Serve.

Across 48 minutes Employed to Serve dish out eleven tracks of energetic damage. Combining metal and hardcore together like it’s something fresh and vital, the band manage to avoid the tired metalcore tropes and instead deliver an album of crushing tunes and anthemic heaviness.

On Conquering the band play music that mixes older metal elements and influences, (Sepultura, Machine Head, Slipknot, etc.), with more contemporary hardcore ones. The band have clearly been brushing up on their 90s metal and 00s NWOAHM influences, and are well-versed in what makes a great metal album. The result is an album of infectious vocals, pummelling riffs, and thrilling hooks. Employed to Serve know how to write a good metal tune, that’s for sure.

There’s a lot of weighty groove on this album, but the songwriting ensures that this never becomes one-dimensional. A variety of speeds and paces help with this too, ensuring that every tracks holds the attention firmly. Not that they have any problems in this regard though, as every single song has its own strengths and personality. The album flows well and taken holistically it’s a very strong collection of music.

Vocally there is a decent amount of variation too. The lead singer has a piercing scream that’s venomous and harsh. She sounds great, and her performance is on fire. In addition to the this guitarist adds deeper growls which add another aspect to the songs. Other vocals also occasionally appear, such as spoken word and and clean singing too.

Conquering is an impressive, well-rounded, and very enjoyable album. Employed to Serve have produced something special here, and if you are a fan of metalcore, groove metal, or hardcore, then this is an essential listen.

One thought on “Employed to Serve – Conquering (Review)”