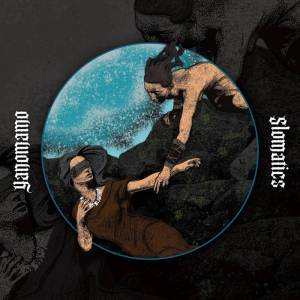 Slomatics are from the UK and Yanomamo are from Australia, both play doom/sludge metal.

I’m unfamiliar with Yanomamo, but their song Dig Two Graves reveals itself to be a very enjoyable six minutes of unforgiving bluesy heaviness. The song is an Eyehategod-esque sludge dirge, with touches of -(16)- and Dopethrone. The song’s slow crawl is an enticing one, and by the end of it I could definitely stand to listen to some more material from the band. I particularly like the singer’s voice, as he shows more diversity and character than many sludge metal singers do.

I’m a big fan of Slomatics, so it’s great to hear the band’s low and groovy approach to sludgy doom once more, although I should point out that this song originally appeared as the opener to the band’s 2007 album Kalceanna. Griefhound is just over four and a half minutes of crushing groove that flattens you to a paste. The riffs are as hypnotic and absorbing as they ever where, although the song has been rearranged in places in its new, rerecorded incarnation. The band had a different singer back then also, so it’s good to hear the present singer stamp his own vocal identity over the song.

I do like split releases, and this short one hits the spot nicely.