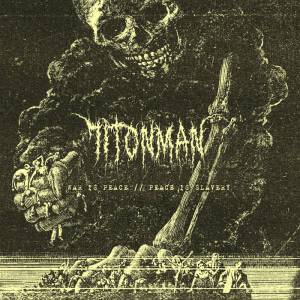 This is the latest EP from Polish doom/sludge metallers 71TONMAN.

After enjoying 2013’s self-titled debut, and 2017’s much darker Earthwreck, I’m always interested in revisting the apocalyptic shores of 71TONMAN.

War Is Peace // Peace Is Slavery contains 23 minutes of nightmarish doom sludge. It’s a collection of two crushing songs that are foul and heavy enough to make the average person wilt with despair, and a third track that is a dark ambient piece.

Riddled with feedback and nihilistic distortion, the music of the first two songs is a malignant expression of dark sludge and even darker doom. The band are clearly interested in producing some of the heaviest material that they can, yet still manage to infuse their songs with a level of songwriting catchiness that’s unusual for the style.

Variations in pace, texture, and shading mean that the music doesn’t lose the listener’s attention. Sometimes, (mostly), the band focus purely on flattening the world around them, while at others the intention is the opposite; world-building through atmosphere and mood.

The third track Ignorance Is Strength offers a different experience from the grim-yet-memorable sludge of the first two songs. This latter track is a dark ambient work that is serviceable enough, but lacks the impact of its predecessors.

It’s great to have some new output from 71TONMAN, and War Is Peace // Peace Is Slavery is an EP that makes me look forward to their next full length.