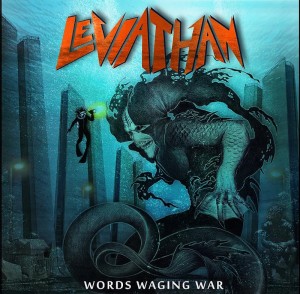 This is the seventh album form US progressive metallers Leviathan.

Having enjoyed 2014’s Beholden to Nothing, Braver Since Then and 2018’s Can’t Be Seen by Looking: Blurring the Lines, Clouding the Truth, I was looking forward to this. Now that it’s here, Words Waging War provides 68 minutes of progressive metal that’s well-written and well-performed.

Leviathan are a band of ambitious scale and scope, although their new album is more refined in its vision, (despite its total duration), in some ways. The songs are still meaty and full of content, but with none of the longer epics in attendance this time, (although that doesn’t mean there aren’t elements in these generally shorter songs that can’t be considered epic).

The songs have plenty of catchy choruses and memorable moments. There’s also a deeper side to their music to, which helps with longevity quite nicely. The music is constructed from tried and tested components, and then given the Leviathan treatment to make them the band’s own. This is the kind of album that’s a pleasure to slowly grow into over time. As you do you tend to notice different ideas and creative flourishes every time, with each spin bringing something new to your attention.

A recommended listen for fans of classic-styled progressive metal.