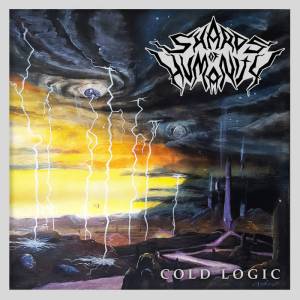 Shards of Humanity are a US death metal band and this is their second album.

The band’s latest effort pushes this further, revelling in its combination of sharp death metal and muscular thrash. Mixing elements of Death, Pestilence, and Atheist, Cold Logic leans increasingly towards the death metal side of the equation, but thrash’s raw influence is never too far behind.

Increased technicality is apparent from the start, and the album seems to run on barbed leads and spiked solos. Some of the riffs seem so sharp you could cut yourself on them. There’s a corresponding increase in melody too, with the leads and solos seemingly built into the songs from the ground up. The tracks are all well-written, and it seems the six years since Fractured Frequencies appeared has been well-spent. It sounds like significant time and effort has gone into these new songs, resulting in intricate thrashfests that make for a compelling and engaging listen.

Cold Logic has a rough, endearing appeal that might not be immediately apparent, and truly comes into its own after a few spins. By this time, its songs have carved out a special place in your skull, where the jagged riffs and manic solos really start doing some long term damage.

Spend the time to get to know Cold Logic and you’ll be handsomely rewarded by a passionate band ripping out some quality, characterful metal.