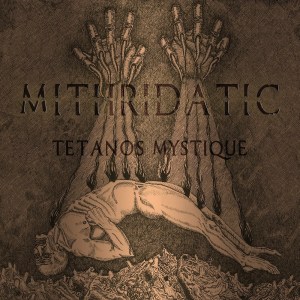 This is the second album from French blackened death metallers Mithridatic.

2016’s Miserable Miracle was heavy and dirty, in a very good way. Blackened death metal of this sort is frequently done poorly, but Mithridatic got the formula right on their debut album.

Darker and grittier than the band’s first album, but also tighter and with leaner song lengths as a result, Tetanos Mystique contains 37 minutes of material that hits hard.

There’s plenty of tasty riffs to digest, and the delivery can occasionally get quite technical in places. Aggressive and foul, the music is well-written and does its job nicely.