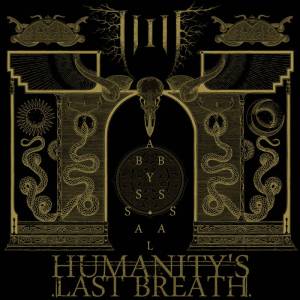 This is the third album from Swedish death metallers Humanity’s Last Breath.

Well, Abyssal is not what I expected. Although I’d heard of Humanity’s Last Breath prior to listening to this album, for some reason I had it in my head that they were a metalcore band. No idea why. I’m also very, very wrong. What we have here is some individually-played death metal; it seems that Humanity’s Last Breath have carved out their own niche in the crowded death metal landscape, and then filled it with mechanised horror.

Nope, Humanity’s Last Breath are not your standard death metal band. Abyssal ably combines thunderous groove and imposing technicality with ease, like Meshuggah-gone-death-metal in some respects. Mutated viral deathcore weaponry can be detected, but deployed in ways that most deathcore bands would be too terrified to even consider. Whether playing slow, mid-paced, or fast, it’s relentlessly heavy. There’s more here than simple heaviness and brutality, however. This heaviness comes not just from the crushing riffs, but also from the grim, thick atmospheres that come off these songs in waves.

Yes, not content with having a bone-breaking death metal core, the band also add in atmospheric elements that feel inhuman and cold. Keyboard and choral effects add malignant auras to music that’s already unfriendly and harsh. This is an unfeeling, cold brand of evil, one which promises nothing but ruin and destruction. Rare melodic moments do appear, but even these just contribute to the overall feeling of listening to something otherworldly and evil. This is death metal that takes the standard genre rules and corrupts them with a sentient darkness that you’re more likely to encounter on a black metal record.

The vocal approach is varied too. Deep, malevolent growls form the bedrock of the delivery, with screams, cleans, semi-cleans, chants, and all other manner of vocal enhancements also included. Again, distinctly non-standard for a death metal band, and very effective.

Due to all of the above, the songs offer a diverse array of extremity to get your teeth into across the album. Each song fits in holistically with its neighbours and the album as a whole, yet still has something individual to offer.

Atmospheric, brutal, dark, and malignant. Abyssal is all of these things and more. Humanity’s Last Breath have created a monster.