Contaminated and Kutabare are both Australian death metal bands and they have teamed up for this split.

This is a split between two bands that sew elements of grindcore into death metal’s rotting corpse.

I’m already a fan of Contaminated, and urge you to check out not only their contribution to this split, but also their debut EP Pestilential Decay and especially their 2017 debut album Final Man.

Contaminated start us off with Death Sick, and its filthy, disgusting presence is truly impressive. The deep growls alone are enough to swallow the sun, while the music is so ugly and foul that only hardened death metal fanatics should expose themselves to it. Blending utter grinding insanity with slow, doom-ridden slowness, Death Sick is a top quality song from a band that have a track record of spreading sickness wherever they go. 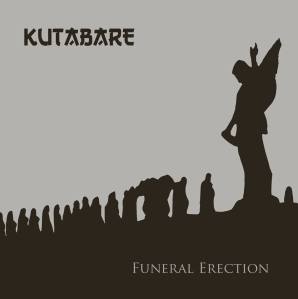 I’ve not heard Kutabare before, but their track Funeral Erection is a very good introduction. Effortlessly mixing faster beats with pummelling groove and slower mood, the first minute and a half or so of the song batters you senseless, before the blast beats finally come in like some form of vicious release. The band have a marginally cleaner and more coherent sound than Contaminated, but this is still filthy, underground stuff. I especially love the disgusting riffs and vibes around the end of the third minute. This is carried into the fourth and final minute, and the song ends in restrained bloodshed. It seems that Kutabare can write a good tune.

What a great little split. At only 8 minutes in total length, you can’t go wrong here. Essential for all underground death metal connoisseurs.