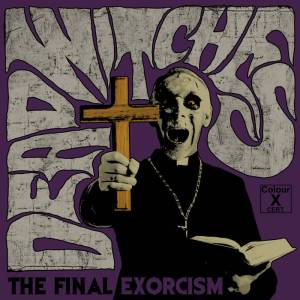 Dead Witches are a doom metal band form the UK and this is their second album.

Featuring an ex-member of Electric Wizard/11Paranoias, the band have had a lineup change for The Final Exorcism and now have a new guitarist, (Sea Bastard), and vocalist in tow.

The new vocalist has a strong voice. Rich and powerful, her performance on The Final Exorcism fits in naturally with what the band are doing. Her voice is used in various ways across the tracks, but she always makes her presence firmly felt no matter what she’s doing.

Hypnotic and psychedelic, the music is heavy and well-written. Like their debut album, the band’s sound is rough around the edges, and speaks of underground clubs wreathed in smoke and obscurity. Dead Witches craft their brand of atmospheric doom metal well. Warm and organic, The Final Exorcism boasts a recording that sounds damn good.

The songs are well-written and have the type of familiarity that’s enticing, while being delivered in such a way that they never come across as tired or stale. Dead Witches are good at what they do, and the songs on this album are likeable and pleasurable to absorb. With more than enough content to ensure repeated listens are a must, Dead Witches’ second album is a stronger outing than their debut was.

The Final Exorcism is a very satisfying and enjoyable listen, make sure you give this a listen.