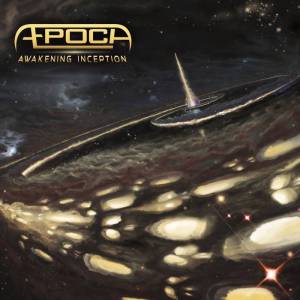 Æpoch are a Canadian death metal band and this is their debut album.

Æpoch play progressive death metal, with additional elements of both black and thrash metal appearing in their sound here and there.

The songs boast strong melodies and a keen sense of songwriting. Well-crafted and composed, the music on Awakening Inception mixes the band’s progressive and technical elements well, merging them with the aforementioned black and thrash influences to produce enjoyably sharp and accomplished songs.

Æpoch’s music has aggression in abundance, but balanced against progressive elements that allow them free reign to explore and wander where they see fit. Immersive riffs and engaging melodies are the norm, as are some blistering solos and bass parts. The band don’t always take the direct route either, as there are more than enough reflective and atmospheric parts peppered around the high-octane main sections to enhance with substantial emotive weight.

The technical ability of the band is well-developed, but I like that the technical aspects of the songs are subservient to the progressive ones, meaning that the music is not ostentatious or showy for the sake of it. Everything here is bent towards fulfilling the needs of the band’s musical vision, rather than the band showing off just because they can. I should also mention the band’s fretless bassist, as he puts on a pretty damn good performance throughout. All of the members of Æpoch obviously know what they’re doing, of course, but I do like it when a band make good use of an often neglected instrument like the bass.

The band’s singer has a good range, delivering his blackened screams and deep growls very well. Guests appear from Wormhole, Ashen Horde, and Hideous Divinity, adding flavour to the vocals/guitars where they appear.

This is music that fans of modern progressive death metal should lap up eagerly, so enjoyably presented and realised is it.  Awakening Inception is a very strong debut release from Æpoch. Balancing a sense of songwriting with sharp, melodic aggression, this is an album that’s easy to absorb and enjoy.