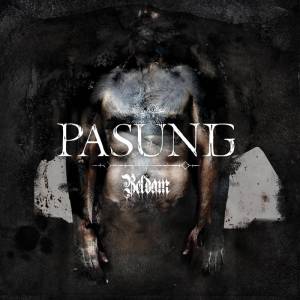 Beldam are a blackened doom/sludge band form the US and this is their second album.

Pasung offers up 48 minutes of gritty, American sludge metal, replete with plenty of doom and an ugly blackened patina.

Beldam channel the spirit of Southern sludge metal, but with their various musical accoutrements they avoid direct comparison to Eyehategod, despite the kings of sludge obviously having an influence on Beldam’s sound. Eyehategod have never had blistering blackened blast beats or bowel-loosening growls, however.

There’s more than just these latter two elements here that mark out Beldam as their own beast, and the Southern metal influences never become too rampant. There’s a distinctive blackened feel to everything here that infects everything like a virulent disease. The word I keep coming back to is gritty. This is very, very gritty; it’s almost as if you can reach out and touch the rough edges of the band’s music.

The doom elements of the band’s sound are enhanced by warm, cloying sludge metal riffs and thick, viscous blackened intensity. Although I pretty much enjoy everything they do on Pasung, some of my favourite parts are when the music slows down and the deep, inhuman growls rip through the surface of the band’s material. The singer’s face-shredding screams are a nasty delight too, to be fair.

Despite the raging aggression and unfriendly veneer of Pasung, it actually has a good streak of song-smart writing within it. Although it’s not the type of thing you’d necessarily call catchy, it is surprisingly memorable, varied, and well-rounded when it comes to its songwriting. At least part of this is down to the band’s singer, as some of his vocal patterns are quite infectiously delivered. In this way Pasung reminds me of the impressive debut album from Sunlight’s Bane; both bands play their own form of underground heavy violence, and do so extremely well, albeit in different ways.

An impressive and filthily enjoyable release. Make sure you give this one a loud listen.

One thought on “Beldam – Pasung (Review)”