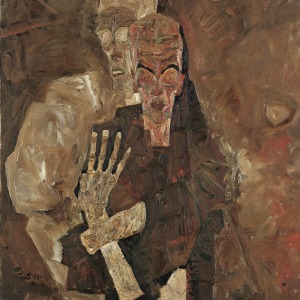 Spectral Lore and Jute Gyte are both one-man black metal bands, the former is from Greece while the latter is from the US.

Although both of these acts offer up black metal that contains psychedelic, progressive, experimental, and atmospheric aspects, they both approach their music with different visions and use different tools to achieve their aims. On this release both artists contribute a single song lasting over 20 minutes, and both of them are based on/inspired by the same source material. Both are also named Helian.

Jute Gyte open the split with their bewildering track. A complex and evolving concoction of unusual melodies, dissonant guitars, schizophrenic drumming, and twisted musical pathways, this is a blackened technical workout that remains cohesive despite its challenging construction.

If you’re unfamiliar with Jute Gyte, then this is a project with a huge discography that combines both black metal and ambient/noise. I like very much that the artist is always looking to challenge himself, and there’s a marked increase in the experimental aspects of his output when comparing his newer work with his older material. As such, Helian sits comfortably as a more atypical example of his black metal work, essentially taking the genre as its base and incorporating many post-metal, doom, atmospheric, progressive, and experimental styles into itself, creating a sort of droning, aggressive cinematic soundtrack of sorts.

Layered and complex, while still managing to entertain and engage, this is a wonderfully warped piece of music. It’s also some of the most interesting and enticing work Jute Gyte has done so far.

After that we’re on to Spectral Lore, who have featured on this site before with the colossal III.

The first half, (ish), of Spectral Lore’s track is a slowly building atmospheric piece of work that has an Earth-style quality to it. Melodically rich with an expressive allure, the song is expansive and open, especially when compared to the frequently oppressive, crowded nature of Jute Gyte’s track. The juxtaposition works well between the two. There’s also a juxtaposition between the music and vocals too, with harsh growls buried beneath the rich doomy, droning music.

The second half of the song starts off as a more metallic continuation of the first, with hefty riffs and vocals that are more aggressive and prominent. Speed is also introduced here, although the majority of the delivery is still of the slower, crushing variety. Some aspects of the first half are returned to, before then descending fully into the realms of blast beats and esoteric melodies, with an accompaniment of frenzied, inhuman screams. It ends in drone, with unnerving noises seeming to howl out of some form of corrupted Heaven dimension.

For anyone into challenging, evocative extreme metal, this split must surely already be on your radar. If it isn’t, it should be.