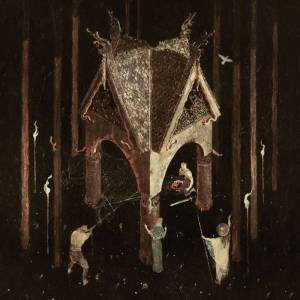 This is the sixth album from US black metal band Wolves in the Throne Room.

After 2014’s Celestite, which saw the band take a significant departure from the norm into expansive ambient soundscapes, this latest release returns to the band’s atmospheric black metal roots, with 42 minutes of new material.

It’s great to hear something fresh from Wolves in the Throne Room, and the songs on this album demonstrate that the band have lost none of the potent force that made their music so compelling in the past. They are not, however, simply repeating past glories with Thrice Woven.

As you would hope for from a band of this stature, the songs are as authentically blackened as you would want them to be, while also exploring wider, more expansive climes. This includes elements such as haunting female vocals, a guest slot from the singer of Neurosis, doom explorations, ambient workouts, the use of a harp, epic melodies, and many other enhancements that are used to accentuate the core black metal of the band’s delivery.

The songs offer a combination of icy aggression and wintry atmosphere. With emotive melodies and subtle synths, the songs each unfurl with a mixture of impressive majesty and supernal darkness. Light and shade are used well, with everything from soft acoustic passages to fiery blasting black metal utilised to create the impact that the band desire.

In many ways this album features some of the most melodic material that the band have produced, in the context of their overarching atmospheric delivery and content, of course. It might seem paradoxical to also note then, that Thrice Woven also contains some of their most straightforward black metal assaults too. Of course, there’s no real paradox, and these two aspects of the band’s music share an easy camaraderie. Also, when they mix together, they present a unified front that provides a more familiar bridge back to the band’s early work.

Thrice Woven is probably the perfect album that Wolves in the Throne Room could have released after Celestite. It acknowledges and learns from the near-legendary material of their past works, while also being forward-thinking enough to show that the band are definitely not resting on their laurels and are still a creative force to be reckoned with. It’s also highly probable that this is one of the best atmospheric black metal albums you’ll hear all year, and gives the band a strong, firm foundation to build on for whatever it is that they do next.

Wolves in the Throne Room have returned, and I, for one, welcome our Cascadian overlords.

3 thoughts on “Wolves in the Throne Room – Thrice Woven (Review)”