On a dark, cold night in Manchester, those in the know have gathered to witness the Cascadian majesty of the mighty Wolves in the Throne Room.

This is only the second time I’ve been to this venue. They seem to have opened it up further than last time I was here for the Hell on Earth Tour; there’s comfy sofas, a (fake) roaring fireplace, and they’re playing Earth over the sound system. It’s all very relaxing I must say.

Support tonight comes from Aluk Todolo, who play a form of instrumental blackened noise rock. Imagine a voice-less noise rock band, with an experimental progressive rock streak, all weighted down with the occult trappings of black metal.

There’s an intimate feeling as the band start their set. Minimalist lighting accompanies what’s essentially stripped-back minimalist music, albeit of a sort that’s textured and with a three-dimensional presence. The band’s sound is clear and strong, and there’s very much the impression of almost seeing back into the past, almost as if you’re witnessing a 70s progressive rock band experiment with tense soundscapes and dark moods.

With a single fluctuating light bulb hanging down into the front of the stage, this is less of a traditional live show and more like you’re glimpsing a band at a rehearsal, jamming experimental noise. It’s a very tight and focused performance, however, one which seems extra special due to its non-standard feeling.

The band are clearly wrapped up in their own world of black psychedelics, and the crowd are merely willing bystanders to their occult rituals.

Wolves in the Throne Room 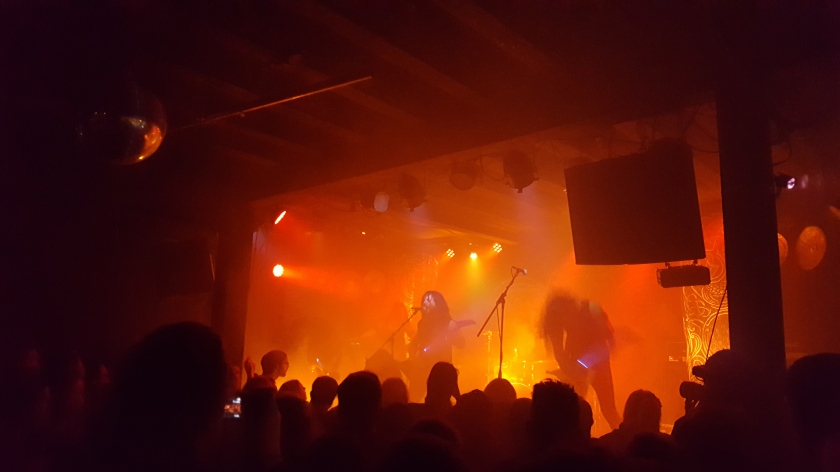 Well, the place is packed, that’s for sure. Clearly nobody wants to miss out.

With so many epic, sprawling songs to pick from across their career, I was looking forward hearing what the band would choose to bless us with tonight. With two tracks taken off sterling new album Thrice Woven, one from Celestial Lineage, and almost all of Two Hunters aired, tonight’s set is one that works extremely well for me. The only disappointment is the lack of my favourite song of theirs Thuja Magus Imperium, but you can’t have everything. Besides, it’s churlish to complain when confronted with such glorious blackened content as we are tonight.

Opening up with the first track off new album Thrice Woven, (Born from the Serpent’s Eye), we’re off to a strong start. All blistering melodies and scathing screams, it’s a song that easily establishes the band’s commanding presence, and the tightly pressed crowd lap it up. It’s not all outright aggression, of course, as the band also delve into the rich atmospheric waters for which they are lauded.

As the set progresses I really like how each song seems to rise out of an ambient backdrop, provided by the keyboardist, with the band’s fully immersive delivery essentially being one long, uninterrupted piece. It makes for an enthralling set. 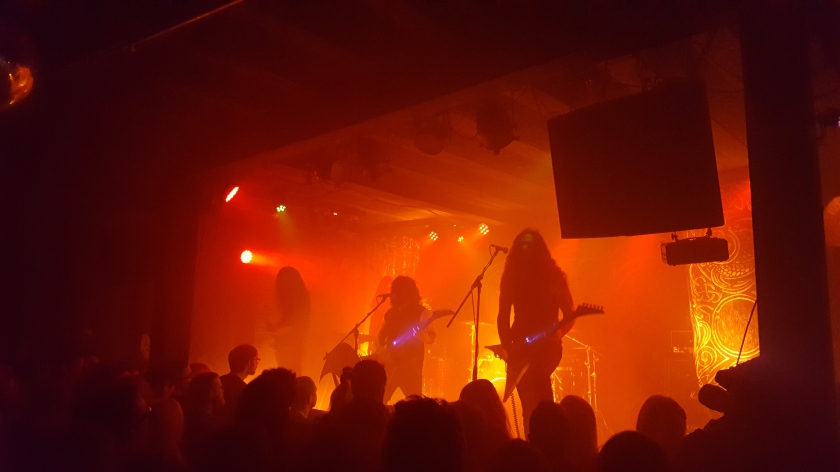 So yes, after Born from the Serpent’s Eye fades into a background of ambient noise and semi-soothing sounds, the band slowly start to build into the next song of the evening; Dea Artio. Crawling out of the ambient soup, this is such an affecting and powerful song. Love It. You can cut the atmosphere with a blade.

This exemplary mood piece transitions naturally into Vastness and Sorrow, much as it does on album. The entire song is a classic that’s just wonderful to experience.

After that it’s back to newer material, with The Old Ones Are with Us. This is probably my favourite song off Thrice Woven. It’s recreated live without the Neurosis guest slot, but loses none of its power because of this.

Prayer of Transformation is the next track aired, full of slow-building malevolent grandeur. All through the performance so far the band have been visibly enthused, animated, and energetically absorbed in their material, and this song is no different. Everything Wolves in the Throne Room play tonight reeks of power and presence, but this seems especially true for their slower/more atmospheric material. Prayer of Transformation is definitely one of tonight’s many highlights, even despite the vocals disappearing at one point.

How about a colossal 20-minute epic for a final song? Yes please! That’s what we get with set closer I Will Lay Down My Bones Among the Rocks and Roots. This is a masterpiece of a song, and it’s reproduced live with all of the emotive strength that it has on album, only with a more visceral live delivery.

Wolves in the Throne Room have lived up to my high expectations tonight. This was a great performance, ending on a massive, epic high note. If you get the chance to see them tour, don’t miss them.