It was a great pleasure recently to see Deny the Urge return to the fray with their long overdue new album As Darkness Falls. Effectively reinventing themselves on one hand, while capturing the sound and spirit of the 90s Floridian scene on the other, the album is more than just a mere homage, and offers 48 minutes of ripping death metal barbarity and darkness.

I had the chance to quiz guitarist/vocalist Henrik Osterloh about the background to As Darkness Falls, and the many challenges and issues that the band has endured over the years…

Introduce us to Deny the Urge

The band was originally founded in 1998. But no one of that line up is part of the band anymore. I joined in 2001, assumed the songwriting and changed the former New-York-styled band into a more Florida one, with a few Scandinavian elements. That in turn lead us to a functional style for the band in the following decade. In 2002 we released our first demo In Consequence, which instantly got a lot of feedback in the underground. 2004 we released our first full-length, Subsequent Confrontation, on G.U.C. This was our first appearance on a broader platform. Especially the German Rock-Hard-Magazine, which is one of the biggest here, was quite convinced of us these days. In 2008 we released Blackbox of Human Sorrow, also on G.U.C.

Our most important shows where definitely in 2010 the direct support for Sepultura and 2011 the direct support for Malevolent Creation. On the other side we did a lot of crushing headlining shows in smaller venues. Festivals we did less. Mostly we did single shows at the weekend. The conditions that time didn’t allow more and beyond that we never cared about our public image these days…

The actual style of the band could be plainly described as technical old school death. I tried to remove all unuseful and irritating elements that we had in the past and intensified the very essence of that, what this music means to me. To name some bands, Morbid Angel, Suffocation, Immolation, Bloodbath, Monstrosity…, Abigor, an Austrian black metal band, was a decent influence too.

Tell us about As Darkness Falls

As Darkness Falls was developed in a complicate process between the end of 2012 and the beginning of 2014. Basically it was a full reinvention of the band. In 2011 we had some private and organisational problems and I decided to split the band up indefinitely. So it was the first time for me, I hadn’t to be considerate of someone else. So I could finally shape the style that way, I always wanted before!

Since I fell in love with death metal in the beginning of the nineties, I was dreaming of an album which combines brutality, virtuosity and gloomy feelings at the same time. The longer I joined the scene I furthermore realised that the practising (and so compulsory the songwriting as well…) on metronome sadly wiped away more and more of these crooked and mysterious tempo-feels that D.M.- albums had back in the days…

With all of that knowledge I wrote three albums and the third of that finally became As Darkness Falls.

How does it feel to have this album about to be released to the world?

Fantastic!!! And most of the announcements and reviews in the run up of the release are confirming that…

You’ve already touched on this, but with 9 years between releases, fill us in on what’s happened with the band during that time -your lineup has changed, for a start

The old line up of D.T.U. was mainly staffed with hobby musicians…Cause of that and some more reasons we never got that far. One year after we released Blackbox of Human Sorrow our bassist left the band, but with Max we luckily had quite a pleasant change-over. But in 2011 our second guitarist Olaf left us and we absolutely couldn’t find a guy in our region who could be a patch of him. So I decided to split up the band indefinitely, wrote new stuff and, bit by bit, staffed the band only with professional, full time musicians.

First was James from Vader. After I tried out quite a number of different guys, I had a rehearsal with him and this motherfucker played my drum-lines exactly note by note while beating his kit to a pulp! – After that I definitely knew that he is the right man for that job! In the meantime Max, the last bassist of the old line up, started a career as full time musician/music journalist and became a decent guitarist on top. He played a powerful bass for the album, on rhythm guitar he is quite a copy of me, but on lead guitar his style is very different. So he could give the album exactly that on top shape that I absolutely wanted to have. The only problem now is, that he surely cannot do bass and guitar live at the same time… 😉

…so actually we are searching for a live session bassist, who can gladly become a new, fixed band member.

How would you compare As Darkness Falls to your earlier work?

In comparison to our former albums, there are many different keys and tempos on As Darkness Falls. But if you listen to this album through, you don’t notice that strongly, because every song ends with the same tone/key in which the next one starts (On the Surface/Infected Curses are the only exceptions). Furthermore there are a lot of additional connecting parts between the songs.

Back in the days we were just a solid and technical band which combined a lot of stuff in the way of patchworking. But if you wanna stand out of the endless mass of underground bands in this genre, you have to gain some kind of unique favour. On As Darkness Falls we consciously tried to create such an image. Surely we haven’t found something new, but we tried to reinvent a specific feeling… 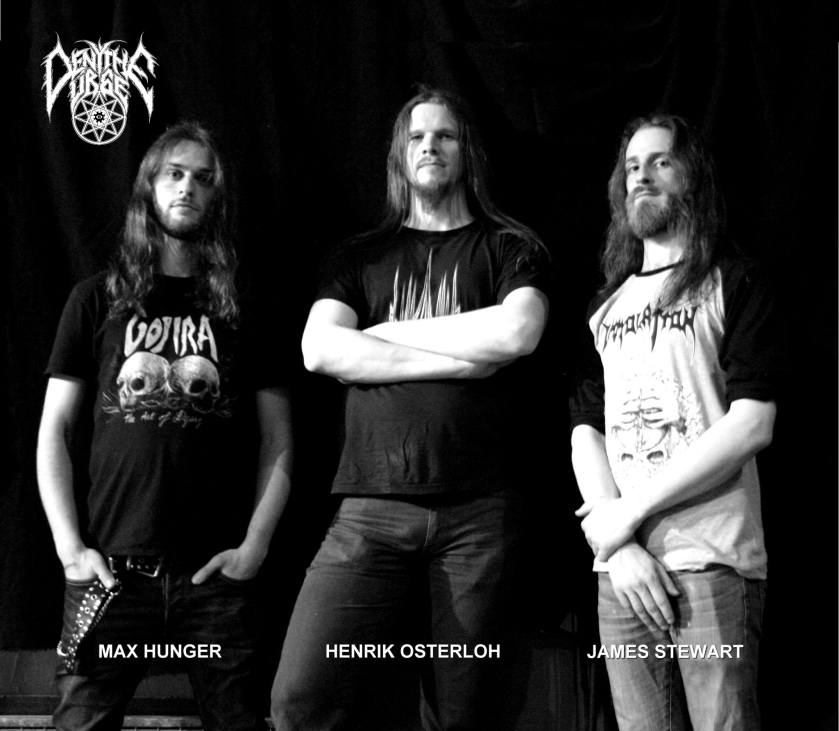 Each song has its decent place in the album and if you would move one to another place, you would destroy the whole concept…I wrote the album one song after the other. The order was determined right from the beginning.

It was quite a long process to get to the final product:

The shortest and hardest part was the drum recording with Scott Atkins/Grindstone in Ipswitch/England. These sessions were the hardest thing we ever did. We had just a four days slot (right after us Cradle of Filth entered…) and worked 12 to 15 ours a day to get the drums definitely safe. On top of that we favoured a very natural, spontaneous (and drummer killing…!!!) way of drum recording, to make the album sound maximally open and alive. This was a maximum challenge! To cite our drummer James “…it was definitely the most brutal album I’ve played on and by far the most punishing recording session of my life!!!”

After the drums were done we did a lot of practising on the tracks. Natural recorded drums without time-map/metronome need a lot of play-through-sessions to get into the groove and find a way to do each time-feel best. In the end we need one year more to finish the rest of the recordings. The guitars we record with Ben Heber in Braunschweig/Germany, bass and vocals did Jost Schlüter in Puresonic, Langelsheim/Germany. He is also responsible for mixing and mastering.

Furthermore we could get three guitarists for a guest solos on this album. Spider (Vader), Krimson (Furnaze) and Nihilverum (Ascension) did their fucking best! (see booklet for details).

A special part too was the arrangement of the additional sounds. For changing my pre-production cheap-gear-keyboards into reasonable sounds, we decided to contact Elettra Bargiacchi, an Italian composer and sound designer. Her skills were indispensable to give As Darkness Falls a very special note on top.

What are your ambitions for As Darkness Falls?

Our ambitions with this album are to kick fucking ass!!! The new line up is only staffed with full-time musicians and for a broader impact we choose some external partners. The goal is to gain better conditions in dealing with shows etc. and establishing the band in another level. Once I did some bigger tours as session guy (Dew Scented, Moridigan) and I can just say that I definitely prefer this instead of doing single shows at the weekend… A good mix of festivals and club shows would be perfect! 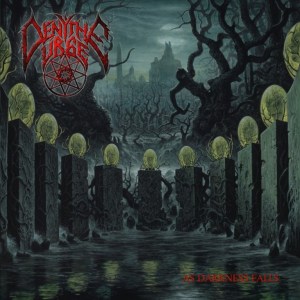 Tell us about the album cover art

After we were sure about the image we wanted to create for that album, there was no alternative to Mr. Seagrave. So I contacted him, drew a sketch as general guide and we negotiate conditions and details. I had quite a strong view of the concept on my side and Seagrave surely his stance too. So it was a long way to get to the point were I told him to go ahead now with the final painting. In the end he changed my basic idea in a way, that the result was just perfect. All in all I definitely would say, that the cooperation with Dan Seagrave and his way to incorporate his clients is very convenient.

What are your views on the German death metal scene in 2017?

There are some good bands out there. Deserted Fear and Ichorid are two of them. Check out Syndemic from Hamburg for example. Purgatory from Saxonia are still a killer. Fearer from Emden recorded some good albums in the past and are still alive… And if you want to listen to very innovative, insane and crushing black metal, check out Ascension from Saxonia, in my opinion one of the best actual German bands in this genre!

How do you think you fit into the wider extreme music scene?

The new line up is the most professional staff Deny the Urge ever had. I already told you that we are only full time musicians now and so I don’t think that we will have any substantial problems with that kind of business. But let’s see how things develop…

What are you up to for the rest of the year?

We will use the rest of 2017 to promote the album best and consolidating all things to get a powerful live-appearance in 2018. If we will get decent live offers earlier, we’ll surely fit into.