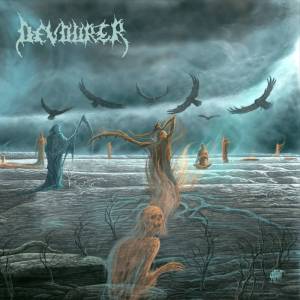 Devourer are a black metal band from Sweden and this is their second album.

With an album cover that screams old-school death metal to me, this is actually equally old-school black metal, raw and cold.

Playing underground, second wave-influenced black metal, Across the Empty Plains is 46 minutes of Swedish-styled black metal that makes good use of both melody and aggression across its playing time.

The sharp screams of the singer strike just the right note, slicing and cutting alongside the equally sharp riffs. Dark melodies and fast blackened rhythms back up their singer’s bold assaults, providing an intimidating and spiked backdrop to his aural violence.

There’s a lot of fast material and blast beats on the album, but this isn’t the only pace that the band operate at and they do slow things down on occasion. This is usually just to provide some form of breathing space before the faster sections start once more. When they do appear though, the slower parts are quite nicely done and can even be quite atmospheric in places.

I also especially like the heavier mid-paced sections that crop up now and again. Nexus of Evil in particular has some great heavy riffs in it, and this is not the only example of this type of delivery to be found across the album’s playing time.

Overall the songs are well-written examples of the style, and despite its icy, frozen veneer, I found myself warming to this quite nicely. It’s an authentic and passionately delivered album, full of blackened treats for anyone that carries a torch for Swedish black metal.

Devourer have impressed. Give this a listen and get swept away in the black tide of darkness that they send forth.

3 thoughts on “Devourer – Across the Empty Plains (Review)”