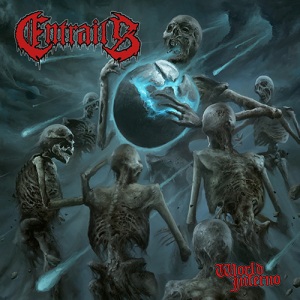 This is the fifth album from Entrails, a Swedish death metal band.

One of the best and most enjoyable purveyors of Swedish death metal returns! Yes, Entrails are goooood.

After spoiling us rotten with 2015’s Obliteration, they’re now back with another 46 minutes of Swedish devastation.

If you haven’t encountered Entrails before, take a look at their logo and it will tell you a lot about the band and their influences.

Entrails embody old-school Swedish death metal better than almost anybody. For someone who’s a sucker for this style, this is the perfect blend of heaviness, aggression, grim melodies, blast beats, and groove.

But what’s this? They seem to have a new singer in tow. Well, he seems to have slipped into the band like a strong fist into an iron gauntlet. His vocals fit the music perfectly, and I can see him being instantly welcomed by any fan of the band. Well done that man.

Entrails have always had a decent amount of energy in their music, but their new singer seems to have brought a massive amount of energetic aggression with him too that’s infused all aspects of the delivery here; listening to World Inferno and trying to not get swept up by the band’s obvious enthusiasm for the material is an exercise in futility.

The songs are exactly that, with structures that promote catchy hooks and the type of memorable death metal that you’d sometimes be forgiven for thinking was left for dead back in the 90s. The compositions are easily digested for anyone with a taste for this kind of thing, and the songwriting is on fire. Even after the first listen there are a lot of choruses and melodies that stand out, and, like the best of albums, the more you listen to it the better it gets.

Ohh, there are some good cutting riffs on this album too. Brutally catchy and jagged, the guitars are a highlight of the release that’s for sure. The album has the perfect chainsaw production, heavy and punchy, with a full sound that allows the band to absolutely crush with their bludgeoning assault.

This is authentic, honest, passionate stuff. Entrails have a talent for this kind of thing, and after five albums they know what they’re doing with the style.