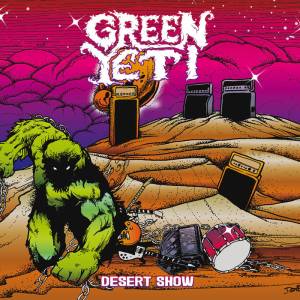 Green Yeti are a Greek psychedelic doom metal band and this is their second album.

It seems like only yesterday that Green Yeti hit the scene with a massive crash with The Yeti Has Landed, but now they’re already back with more killer tunes to wow and entertain us.

And entertain they do. With their debut album Green Yeti successfully proved beyond all doubt that they know a thing or two about the doom style, and on Desert Show they only seem to have amassed further esoteric doom knowledge and wisdom. Yes, don’t let the colourful, cartoon album covers fool you; Green Yeti are masters at their art, and have a surprisingly sophisticated grasp of what makes this kind of stoner/psychedelic doom metal so appealing and enduring.

It’s all about the songs and the feelings you get from them, of course, and Green Yeti have this covered. The tracks on Desert Show may not generally run to the epic lengths of those of their debut album, but it’s still exceedingly easy to get lost in the band’s labyrinthine constructions.

There’s an exploratory feel to this release, as if now that the Yeti is finally here, he’s gone wondering in the desert, trying to find…who knows what? All I know is that it seems to be an epic and eventful journey, captured by the band here in all its hazy, sandy glory.

Full of heavy, emotive riffs and the type of songs that just keep drawing you back to them, Desert Show is a worthy successor to The Yeti Has Landed.

The album has a quality recording and you can hear every distorted riff as if you were in the room with the band as they peel off their monolithic heaviness and psychedelic vibes. Combined with the quality of the music itself, the band sound more confident and assured than ever.

Green Yeti are a larger-than-life band in many ways, not the least of which is the colossal, compelling music that they create. Come see the Desert Show, it’s well worth it.