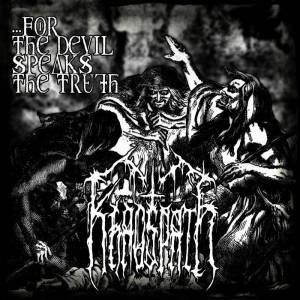 This is the second album from Khaospath, a Swedish black metal band.

This is an interesting album in a few different ways.

What this means in practice is that the band not only know how to blast and shriek with the best of them, but they also know how to unleash a good riff that sees them rocking out in filthy blackened style, or a classic metal lead that accompanies the darkness that they otherwise project.

The songs really work well when they settle into a malevolent groove, as they frequently do. The parts where they speed things up and use blast beats are very enjoyable too, but for me Khaospath are at their best when they’re not going all-out.

Although not an overly melodic band, there’s enough melody here to work nicely with the dirtier, uglier rhythm guitars.

The majority of the vocals are of the screamed variety, with a noticeable exception being the seventh and the final tracks, which both sport epic clean singing. The entirety of the final track is somewhat of a departure from the rest of the album actually, musically as well as vocally, and really sees the epic heavy metal side of the band shine through strongly. More of this in the future, please.

So, imagine the likes of Watain, Marduk, and 1349 mixed with a little bit of epic heavy metal, and you’ll have Khaospath.