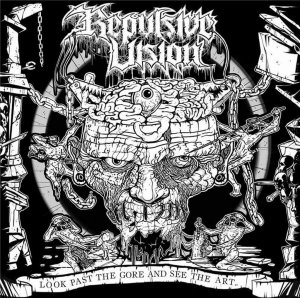 This is the debut album from UK death metallers Repulsive Vision.

Influenced by the old-school death metal classics, the songs on Look Past the Gore and See the Art are mainly short and to the point, with a slight punk/hardcore influence here and there.

This is a band with bite and attitude. This comes across loud and clear in the songs, which are delivered with aggressive glee and professional skill.

With the old-school influences that the band obviously love so much, the emphasis here is very much on songcraft within the death metal framework, meaning that the songs are well-written and both catchy and memorable. I always like it when an album contains songs that are all easily identifiable from each other and have their own individual personality. Look Past the Gore and See the Art is one such beast.

The singer has an aggressive snarl that’s halfway between a growl and a scream. With personality and variety, I like his voice a lot, especially as he’s doing something a little different from a lot of generic death metal bands.

This is true of Repulsive Vision as a whole – they’re doing something a little different from a lot of death metal bands out there and definitely have their own individuality. The punk/hardcore influence that can be heard enhances their sound too.

These traits remind me, in spirit if not completely in sound, of fellow UK death metallers Venom Prison who released their debut album Animus last year. Although the two bands don’t really sound like each other, (Repulsive Vision have more of an old-school vibe, for a start), they do share similar characteristics that make them both stand out from the death metal masses. Animus was one of my favourite releases of 2016, and although it’s very early to be able to make this call, it’s possible that Repulsive Vision could end up being one of mine for 2017.

Well, you’ve gotta check this out. Do it now!