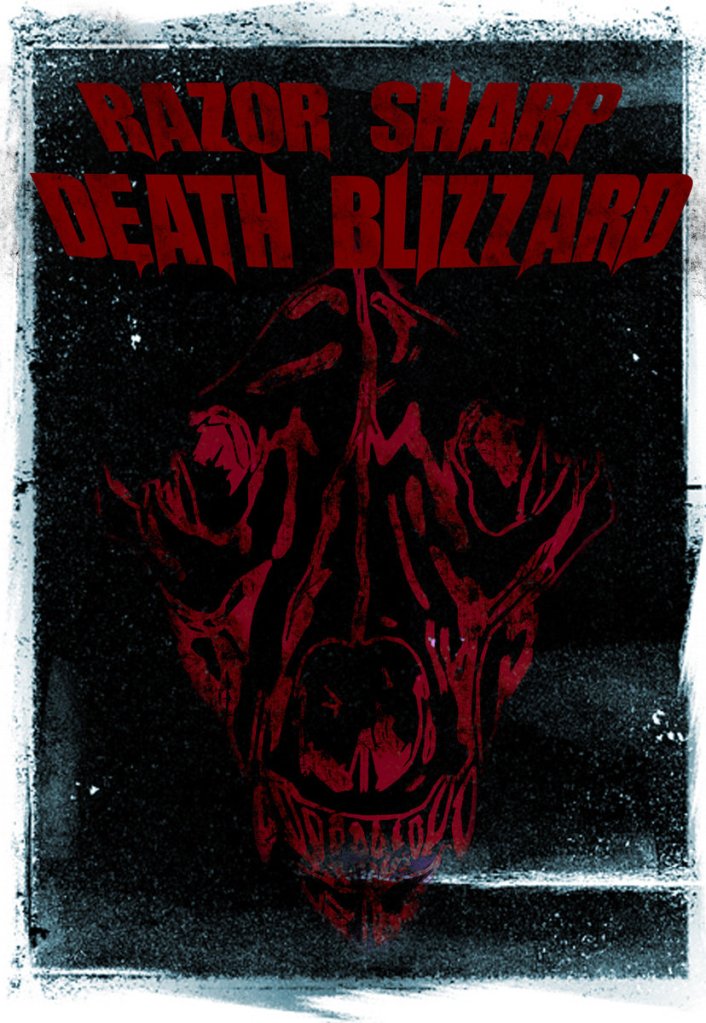 Politically-charged UK hardcore heavyweights Razor Sharp Death Blizzard not only have one of the best monikers recently heard, but also produce one Hellishly good racket. Brutally catchy and surprisingly nuanced, their debut album You Will Burn is an adrenaline shot of controlled chaos and focused destruction.

Razor Sharp Death Blizzard are Jamie on vocals, Daz on guitar, Graham on bass and Liam on drums.

A dutch band called Hemelbestormers album Aether is fucking awesome, Sinistro’s album Semente is a belter saw them by chance live at Roadburn this year, anything Ohhms have done especially Bad Seeds best band in the UK just now in my opinion, Gargangua who I saw at Riffest this year were fucking beast and an American band I caught last year at Roadburn called Lo-Pan their album Colossus is one of my favourites just now.

I’ve gotta ask – where does the band name come from?

Ha ha ha, the name comes from our original drummer Dean. He was walking home from college one day when it was snowing hard and too cool or skint to have a jacket. He said it was like walking through a Razor Sharp Death Blizzard  🙂

Tell us about You Will Burn

You Will Burn is an outpouring of frustration, anger and rage at the state of a world run by greed. Some songs are aimed at the UK right wing fascist scum and worldwide right wing scum. Some are aimed at the shit storm of persecution against Palestinians and other countries getting fucked over by the west. We touch on animal cruelty and have been active in supporting hunt saboteurs in raising funds to help them remain active. Religion, old age are on there too. The world is fucked and we all need to stand up against the cunts taking us down.

I’ve not got a favourite but there’s a song that took me by surprise. We recorded the album over six days with the legend Chris Fielding at Skyhammer Studios near Liverpool. I couldn’t get down until the Wednesday night as I was real busy at work. All the guitars, bass and drums were down ready for me to do vocals. On the Thursday morning Chris played back what was done by the guys. It all sounded amazing but one song really stood out, ‘Right Wing Scum’. I said to the guys “did you guys do that? Its fucking amazing. How the fuck do I follow that up, fuck!” Anyway I still didn’t really know how I was going do the song vocally. Daz and Chris just said “go for it, do whatever you think and see what happens” When we listened back to Right Wing Scum I stood in the middle of the room and was blown away. I was so proud, shivers all over and I was welling up. Chris really brought out the best in us and I’m so proud of what we achieved that week in January.

The artwork was done by an amazing guy called Sam Hayles who was recommended by my friend Claire. We just told him what we were about and we wanted something that said “fuck the government, the world is fucked”. He gave us two options, we chose one and I’ve got to say we love it. Cheers Sam x

Writing songs either takes a couple of jams or months of fucking pain, ha ha ha. Usually Daz will come out with some riffs and we’ll jam them until Graham and Liam get their heads round the riffs. We’ll jam a bit more to get a structure to a song and listen to what works and doesn’t. Then sometimes Daz will have lyrics or part lyrics which I tidy up getting myself inside his head and zone and finish them off. Some songs I just stand with the mic, pen and paper, feel the tune, lose myself in the tune and let it speak for me. I’m not great at sitting writing things without the noise and chaos of the practice room. It’s as easy as that  😉

Our music will follow the same sort of theme, politically charged, angry and shouting out to the people who need a voice. We’re always experimenting with different tunings and are currently messing around with songs for the next album. The couple of tunes so far are huge powerful beasts of rifftastic beef.

Don’t see the point of being in a band if you don’t play live. Playing live is what keeps me going in a band, there is no better experience, love it.

What are the next steps for Razor Sharp Death Blizzard?

The next steps are going to be getting out gigging around the UK and Europe. Raise our profile, get in people’s faces, win their hearts, ruffle a few feathers, and give a fuck about what the fuck the establishment are fucking us all over with.