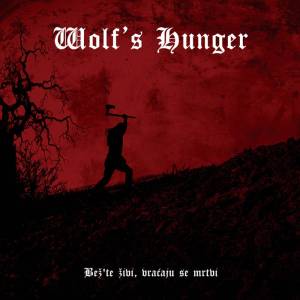 Wolf’s Hunger are a Serbian black/thrash metal band. This is their second album.

Despite there actually being a fair few bands out there that play blackened thrash metal in a convincing and enjoyable way, I still always think of myself as someone that’s not a huge fan of mixing the two. I think it’s probably because for every band that does it well, there are a whole bucketload more that play it in such a way that the raw power of both parent styles is diluted.

Which leads us to Wolf’s Hunger. These fall into the former camp, (which should be obvious as otherwise I wouldn’t be writing about them).

Bež’te Živi, Vraćaju Se Mrtvi has a strong sound, which is apparent from the start, and has a strong sense of what makes a good thrash metal song. The band take some nice thrash riffs and imbue them with a bit of blackened magic and evil bite, resulting in some quality Slayer/Kreator worship with added darkness.

There’s a real nostalgic old-school thrash metal feel to this that’s almost tangible, as if I can almost reach out and touch the 1980s. Don’t mistake this for a retro crapfest though, as the production values are very up-to-date, (although not overly polished or sterile), and the black metal influences make for a very barbed version of the style.

Vocally we’re in ugly scream/shout territory. The singer has a decent voice and I like what he does, but to be honest the real star of the show on this album is the Hellishly good riffs. The band seem to be able to write some very authentically-Slayer riffs. It’s all dizzyingly enjoyable.

We mustn’t forget their black metal side though, with some tracks exhibiting this part of their sound more than others. A song like Rusija is a great example of this, with huge atmospheric blackened grooves.

This is a really strong and enjoyable album. That’s all there really is to say.