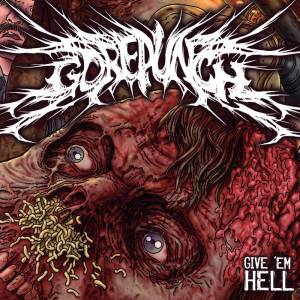 Gorepunch are from the US and this is their début album. They play Death Metal.

Comprised of members and ex-members from veteran groups such as Fear Factory, Aborted, System Divide and Malignancy, Gorepunch already have a lot of experience. Give ‘Em Hell makes the most of this and wastes no time in getting to the heart of the matter – blood, guts and blasting brutality. Remember, the quickest way to the heart is through the ribcage.

Their album has an interesting approach to Death Metal that takes some influence from Grindcore but largely adopts a split between Technical Death Metal and a state-of-the-art modern approach, resulting in an album that’s just at home slaying you with a direct approach or flaying you alive with an off-centre complicated attack. It’s a formula that results in a Modern Death Metal album with its putrid fingers in enough different pies to keep you happy and focused throughout the 26 minutes playing time.

The songs are like an enjoyable beating and feature good playing, pummelling riffs and savage vocals. The band use enough melodics to keep things engaging, but don’t allow them to go overboard and detract from the brutality.

A really engaging release that satisfies those cravings for a short, sharp blast of aural carnage that still has some substance to the barbarity.