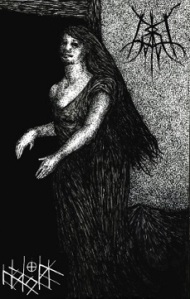 Cara Neir and Venowl are both from the US and they’ve teamed up for this tasty split. Cara Neir play Black Metal with a Crust/Punk influence, whilst Venowl are the embodiment of dirty Doom evil.

Cara Neir are up first with three tracks lasting just under 12 minutes. Theirs is a direct assault that strips the flesh from bone and mutilates with extreme savagery.

Brutal riffs and Blackened melodies are powered by a Crusty assault that leaves the listener battered.

Sharp vocals eat away like acid as the singer attempts to claw his way through your ears and into the meaty goodness within.

They’re no one-trick pony however, as Cara Neir have shown throughout their prolific back catalogue. Even here on their short contribution to this split they show a good amount of variety.

Aeonian Temple is anger personified, Nights… is Shoegaze/Post-Metal in the style of Sun Devoured Earth and Pitiful Human Bindings, which is also the longest song, comes off like lo-fi Black Metal with a corrupted aura and a rabid bite.

Venowl have not long released their début album Patterns of Failure and with that success in mind we turn to them. They contribute only one track to this split. It’s called Scour (Parts I and II), it’s almost 22 minutes long and it is an ode to gradually inflicted and long, drawn-out pain. At least, that’s what it sounds like to me.

Venowl play slow. Except when they play even slower. It’s filthy, unhealthy, dangerous and barbed. It’s everything you love about unhinged, caustic Doom.

The track largely defies description except to possibly detail the descending layers of Hell and the accumulated millennia of torment and suffering that has accreted there.

Here we have two very different bands that manage to complement each other perfectly. I think you should do yourself a favour and get hold of this split. Darkness and misery never sounded so underground or so good.