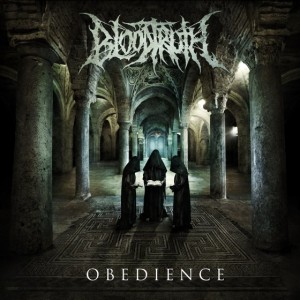 Bloodtruth are from Italy and play Brutal Death Metal. This is their début album.

This is Brutal Death Metal played with passion and delivered with a storm. Crisp, crunchy riffs and blasting drums lead the charge with relentless growls and surgical strikes following up. Oh yes, and Gregorian chanting.

The band boast a crushing sound where everything sounds sharp and ready to maim. It’s heavy and it’s adrenalin soaked.

The singer has a gruff, satisfying growl that fits the music like a glove and he mainly spends his time shouting vicious diatribes and barking like a chained attack dog.

The songs are focused and brutal, with blast beats aplenty and light speed melodics and solos added in at all of the right places. The melodic guitar leads are nicely fused with the music so that they don’t detract from the brutality at all. Even though they frequently do use melodies in their songs this is not a band who would ever be described as Melodic Death Metal, and rightfully so. This is all about crushing, Brutal Death Metal and how they can demolish everything around them.

Obedience has a good pace to it and the guitars alternate between heavy chugs and ultra-blasting speed assaults in a way that flows naturally from one riff to the next. Each track is an enjoyable ride through mayhem and carnage as the band deal out punishment and pain with every precise turn through the Death Metal landscape.

If you like punchy Death Metal played with sheer brutality and clinical precision then there’s nothing not to like here.