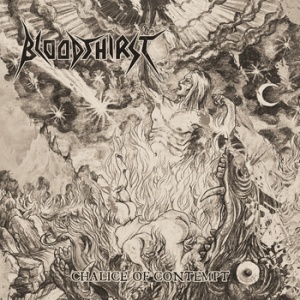 This is harsh music that positively bursts forth with pure belligerence and arrogance.

For all their severity they also find the time to introduce some melodies and leads into the proceedings which provide depth and interest.

The addition of Blackened riffs and blastbeats into the Thrash Metal template is a welcome change from the hordes of Thrash bands who all want to be Testament. Some songs are more Thrash-based than others, while others sport this Black Metal influence more openly.

In fact, sometimes I’m torn between describing them as a Blackened Thrash band, or a Thrashy Black Metal band. Not that it really matters, but it demonstrates that they do something more with the the Thrash template than simply repeating what others have done before them. Either way; it’s Metal to the core.

The vocals are abrasive and uncompromising, falling more into the Black Metal camp than the traditional Thrash one. Snarling and raging; they’re not to be underestimated.

A very good album – give it a listen.