With their latest EP It’s Time to Paralyze The Von Deer Skulls have shown a willingness to experiment and test the waters of their burgeoning sound. Find out more below…

Peter: Hi, we’re The Von Deer Skulls a France based band. We’re a trio, but some other musicians play with us sometimes. We play something the press defined as Rock Doom Ambient, sometimes Indus or Post-Rock.

Give us a bit of history to The Von Deer Skulls.

Freke: The band started in the end of 2012, we have recruited Peter at the beginning to make the visual stuffs of our last band (The Dead Sound), but after talking a long with him we decided to make a new project.

Peter: Yeah at that time I worked on some songs that have become the basis of the project, then we wrote the song “B*tches Of The Wood” which is the one was entirely composed for the band like the interludes, intro and outro.

Hektor: Then we decided to make our biography like a history to serve the visual aspect of the band.

Where did your band name come from?

Hektor: The band name come from the artist pseudonym of Peter (Peter Skull), because like a leader to the band, and the “Von Deer” come from the semi-fictional biography of the band and because we have often antlers on our video-stage costumes.

Freke: It’s also to making us a family.

Peter: Influences are from everywhere, each one listens to different things, I’m a big fan of Jazz, Tool, Godspeed You! Black Emperor, indus things. Hektor listens to a lot of Post-Rock, Electro, but also Radiohead, Kadavar and Freke listens to old Rock ’n’ Roll like Black Sabbath, and some loud things like Sunn O))) or Indus.

Freke: Right now I listen to a lot of Kadavar, go to listen this German band if you don’t know, otherwise some old Marilyn Manson & NIN period.

Peter: On my side, I listen some more soft things right now as The Decemberists, Miles, Coltrane and Goon Moon and Pelican a lot.

Hektor: I listen some Queens Of The Stone Age’s songs, Pelican too and the Godspeed You! Black Emperor’s discography.

Peter: We would like to record songs which are the beginning of the project, to know each other a little better as a band and to show the public who we are. But it is just the beginning, a presentation.

Hektor: Yes, we think that’s a good beginning. We worked hard to develop the visual aspect as much the music, both are equally important in our universe.

Freke: We were actually surprised to have such good returns.

Freke: Peter works on the structure, and we’re making all the atmosphere.

Peter: As for the songwriting process it changes according to the songs. Sometimes we want that song sound like that and sometimes they grow up alone.

Freke: I think the next songs will be more loud, maybe more direct.

Peter: We’re working on it right now, some different songs, some heavy, some more ambient, but yeah maybe more direct for the moment.

Tell us a bit more about the visual aspect of your band.

Peter: As we say before the visual aspect is as much important than music. Because it opens so many possibilities. At first I’m a visual artist, I love painting, shooting videos… for this band, because we create our own mythology and histories with that, it’s like a tale what we are proposing to the people, with the costumes, the videos…

Freke: And it’s also a way to distance ourselves from what we’re doing. The important isn’t what we look like, important is the music, the tale.

What’s next for The Von Deer Skulls?

Peter: Next, we’re working on new songs right now like I said, we hope to record them at the end of this year or in the beginning of 2015. And we’re going to do new videos to go with it.

Hektor: Yeah, don’t forget to follow us, new costumes and visual stuffs are on the go! 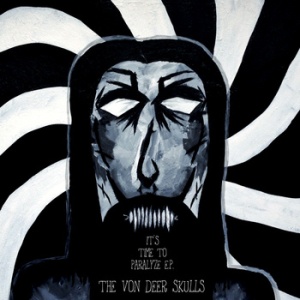 The Von Deer Skulls have their origins in many different countries and have a suitably unusual sound to boot.

I suppose the best way to describe this band is Experimental Rock with elements of Drone, Ambient and Electronica/Industrial.

The tracks here are largely laid back, relaxed affairs. Low-key riffs and sounds move the compositions forward whilst soft vocals and gentle noises punctuate the flow.

This is relatively easy listening and the overall mood is an atmospheric one. Although I wouldn’t describe them as having a dark sound per se, it’s certainly not a bright and hopeful one either. They seem to be aiming for a slightly creepy, unnerving sound and I think they’re headed in the right direction.

The guitars are largely lo-fi but the distortion is noticeable here and there. They even approach a Rocky beat in places.

This is a good release from a band who are still finding their sound and these songs give them a good base to work from. If you enjoy this kind of Experimental Post-Rock then The Von Deer Skulls should be right up your street.

Give this band some of your time and see what you think.