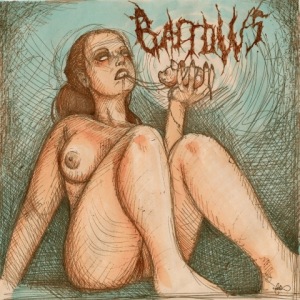 Barrows are a Canadian Grindcore band and this is their début album.

This is sophisticated-yet-ugly Grindcore that’s added to and fleshed out by Brutal Death Metal elements, resulting in savage Deathgrind the likes of which will be too extreme for most.

The songs combine rhythmic, pulsing mayhem with blasting carnage and insane guitar torture. There actually is occasional melody involved in their assault too, albeit of a twisted, warped variety.

There’s a lot going on in these songs as the band chug, Grind, blast, groove and rip their way through the 29 minutes on this album with vicious glee and crazed enthusiasm. It’s all about the brutality, but with a surprisingly varied attack. The point is, Barrows are a multi-dimensional band with many different facets to their offensive rather than just playing ferociously fast.

The vocals are a fierce collection of grunts, screams and pig-noises that are enough to scare away all but the most hardened of Extreme Metal fans. The singer’s performance is not to be faulted and he frequently sounds like about 100 maniacs all at the same time, which is no mean feat.

Sort of like a cross between Cattle Decapitation, Pig Destroyer and Circle of Dead Children; Barrows have produced quite a stunner of an album, which is up there with the latest Maruta release as a prime example of quality Deathgrind.

Essential listening for all fans of Grindcore extremity.