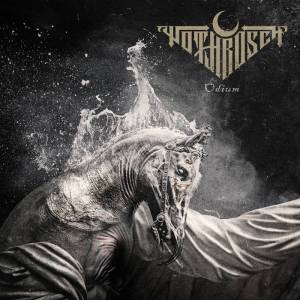 This is the debut album from Greek black metallers Wothrosch.

To open this review I’m just going to lazily reference the promo blurb, which states that Odium is for for fans of Septicflesh, Anaal Nathrakh, Shining, Behemoth, and Fleshgod Apocalypse. It also states, “Imagine the soundscape experience of Septicflesh clashing into the furiosity of Anaal Nathrakh: that is what Wothrosch sounds like.”

So now you know.

Wothrosch play a modern interpretation of black metal that also contains elements of death metal. It’s professionally presented and sounds monstrous. Across 55 minutes the band mix epic grandeur with ferocious aggression, and the combination of Anaal Nathrakh-esque brutality and intensity with Septicflesh’s epic majesty and songcraft is apparent. I can see why the promo blurb went with this description. Thankfully Wothrosch offer more than mere plagiarism or hero worship, and while Odium may wear its influences on its sleeves, it also produces something worthwhile of its own with them.

Odium is a well-written affair, and Wothrosch clearly know what they want to do with their music. The songs are arranged with dynamic flow, thought has gone into the transitions and overall structure of the music, and the compositions in general speak of a band with great experience in the extreme metal arts, despite this being only their debut album.

The album is harsh and brutal, but also carries atmosphere and mood well. The individual songs take different aspects of the overall sound and fuse them into pieces of the whole, highlighting their own soundscape before feeding this forward.

Odium is an accomplished opus of well-crafted extremity.