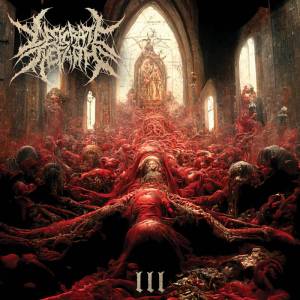 This is the third album from US death metallers Desecrate the Faith.

Despite being on the longer side for brutal death metal, I really enjoyed 2017’s Unholy Infestation, so it’s great to finally have some new material from this savage band. III is a merciless beast that spends 49 minutes defiling and desecrating everything sacred, via ten tracks of skull-shattering brutal death metal.

Yes, fans of bands such as Aborted, Suffocation, Beheaded, Defeated Sanity, Benighted, Cannibal Corpse, Severe Torture, and the like had better pay attention to this.

The songs on III are as brutal as you would want. There are massive riffs that destroy and demolish, and the drums punish and pummel. The singer’s deep growls are perfectly delivered, and his voice is very satisfying. Desecrate the Faith are doing brutal death metal very right.

The songwriting is precise and deliberate, allowing the band to deliver well-calibrated carnage. The music has the right brutal-to-dynamic ratio, and little snatches of technicality, melody, and atmosphere are included here and there to spice up the bloodshed. The band can certainly play, and there are many good solos to be found on these songs. The tight performances only enhance the songwriting, and the entire package that Desecrate the Faith bring to the table is a strong one.

III is less polished and rawer than Unholy Infestation, but in a good way; III sounds absolutely great – I prefer how III is produced as it has a more organic sound that makes for a really enjoyable listen.

Despite still being lengthy for a release of this unrelenting nature, Desecrate the Faith are worth investing the time in. III offers a superior slab of brutal death metal ferocity, and if you haven’t yet bought into their brand of brutality, then I highly suggest that you do.