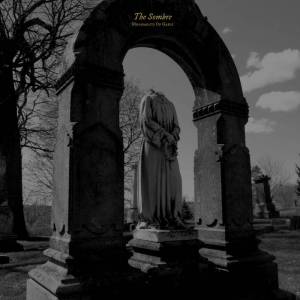 This is the third album from Netherlands one man death/doom metal act The Sombre.

Brought to us by the artist behind acts such as Gnaw Their Tongues and Dodenbezweerder , The Sombre impressed me on last year’s split with Grim Fate, so I’ve been looking forward to what a full length might be capable of.

Well, I shall wonder now longer, as Monuments of Grief brings us 39 minutes of The Sombre’s doom-laced darkness.

Monuments of Grief is a mournful slab of death/doom. Imbued strongly with despondent woe, aching misery, and despairing loss, this is a dark and bleak record filled with negativity and pain. Modelled on the classic Peaceville Records era of bands Paradise Lost, My Dying Bride, and Anathema, The Sombre’s music pays tribute to these gloomy doom lords while also putting its own stamp on proceedings.

This is an atmospheric record. The songs are slow and well-considered, powered by macabre energies to extinguish light and all hope. With emotive melodies, expansive synths, and well-written compositions, Monuments of Grief achieves what it sets out to do commendably. It’s an easy album to get swept away by, falling deep into its cavernous depths, and before you know it the record has ended. However, without really realising it, you’ll soon be drawn into its dark embrace once more.

If you’re in the market for a downbeat death/doom album that’s heavy on the atmosphere then look no further than Monuments of Grief.