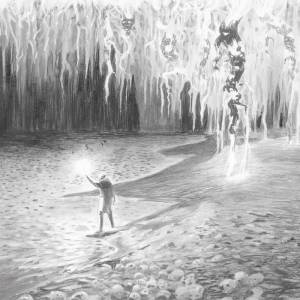 This is the second album from UK doom band Famyne.

II: The Ground Below offers a modern take on the traditional doom metal sound. Across 45 minutes Famyne incorporate a few elements from other subgenres into their sound, complementing their core style well. Think of a mix between Warning, Soundgarden, King Goat, (older) Boss Keloid, and Fvneral Fvkk, and you’ll have a decent idea of what this sounds like.

The vocalist is likely the first thing about the music that strikes you. The singer of Famyne has a powerful, commanding presence in the songs. His voice is rich and full, and his performance across the songs is very good indeed.

Executed with skill and driven by a band that know what they’re doing with this sort of material, the epic songs hit the spot as they spread their gloomy moods across the land.

The songs are well-written examples of the modern doom metal style that has learned valuable lessons from the old-school. When they need to the band build atmosphere well, while at other times they simply peel off slow, heavy riffs as a bedrock for the singer’s forceful and compelling delivery. The lighter moments show a band not afraid of easing off of the distortion to provide a textured and measured approach to songcraft. The heavier parts, however, simply crush with blunt force heaviness and deliberate simplicity, but without sacrificing depth or emotive potency.

II: The Ground Below is a well-rounded and rewarding collection of songs. Famyne have succeeded in producing an album that is a very enjoyable slab of emotive doom.

One thought on “Famyne – II: The Ground Below (Review)”