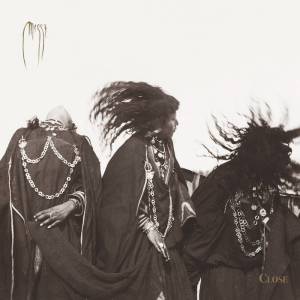 Messa are an Italian doom rock band and this is their third album.

It’s with great expectations that I turned to Close, having enjoyed both 2016’s Belfry and 2018’s Feast for Water so much. I have not been disappointed, I can assure you.

Much like they did from their first record to their second, Messa have continued to develop and push their sound further between their second and their third. The band’s base of doom metal is intact and healthy, but on top of this for Close Messa have arranged elements of post-rock, jazz, progressive rock, and Middle Eastern influences, in striking and emotive ways.

The songs are characterful and well-composed. With a duration of 65 minutes Close is Messa’s longest release yet, and the extra time granted has been well-used. The album easily holds the listener’s attention, and is wonderfully diverse. With progressive flourishes, playful melodies, jazz interludes, exploratory post-rock breaks, and a range of other creative ideas and stylistic choices, you never quite know what’s going to happen next. It’s all brought together by the skilled hands of the band, however. Everything is tied together by the musicians’ skill, the singer’s exemplary voice, and the underlying doom presence. Close is a joy to listen to, and the more you do, the more you will discover.

The singer’s voice is powerful and beautifully performed, and she works in tandem with the expressive music to produce songs greater than the sum of their parts.

Close is another great step forward for Messa. Their powers and strengths continue to build with every release, and on their new album Messa have produced something special.

One thought on “Messa – Close (Review)”