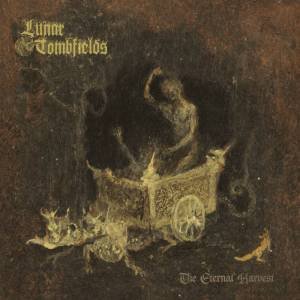 Lunar Tombfields are an atmospheric black metal band from France and this is their debut album.

Featuring four lengthy tracks with a duration of 47 minutes, The Eternal Harvest offers the discerning listener a feast of atmospheric black metal. With a sound taking influence from both old and new, Lunar Tombfields play engaging and involving music. Their style is reminiscent of a mixture of the old-school Scandinavian scene and the newer US Cascadian style.

Epic in scope and rich in substance, the songs are well-composed and highly atmospheric. A range of textures, paces, and dark moods are explored, taking the listener on a blackened journey into the music’s expressive depths. From grim intensity to resplendent beauty, the music rages and roars as it crafts a finely-detailed soundscape from the ground up. Many of the guitars carry melody and emotion to great effect.

The vocals are a sort of abrasive gargled snarl. They’re on the more unusual side for this sort of style; imagine depressive black metal vocals, but where these are usually sharp and wailing, here they’re blunt and deformed. This is not a bad thing, as the vocalist has more character than you usually find, but I’m sure they will also be more of an acquired taste for some.

Taken overall, the band clearly know the style well, and despite being their first record the album is a fully-formed and substantial one.

The Eternal Harvest is an atmospheric black metal album that is easy to fall into and get lost in. The music is effortlessly enjoyable and satisfying for adherents of the style, and Lunar Tombfields demonstrate their capabilities convincingly across these four songs.